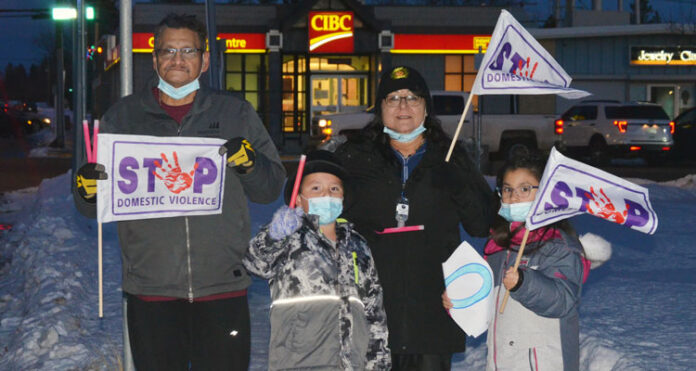 These are issues present in all communities – big and small alike – but issues many people feel don’t always get the attention they deserve.

That’s why a newly formed partnership of various groups and organizations throughout the Meadow Lake community banded together recently to organize an awareness event designed to raise the profile of interpersonal violence and to help people understand just how much of an impact it can have. The event, which featured a walk followed by a series of guest speakers, took place during the evening of Dec. 1.

“Saskatchewan Violence Prevention Week was Nov. 28 to Dec. 4, and that is why we chose to do the walk when we did,” explained Anne Duriez, Roots of Hope community coordinator. “We also felt there was an appetite in the community for more awareness around the prevention of interpersonal violence.”

The event was organized by the North West Friendship Centre, the Waskoosis Safe Shelter, Flying Dust First Nation, North of 54 and Roots of Hope.

“The walk itself began at the local Legion branch, and we walked to where the horse statue usually is (on Centre Street) and back,” Duriez continued. “We had originally planned a bit of a longer route, but some of the sidewalks were very icy.”

More than 30 people took part in the event, which also included a light supper.

“There were quite a few youth – at least half of the participants – which was nice to see,” Duriez said.

Following the walk, the crowd gathered back at the Legion where they heard from Sheila Mirasty and Trina Alexander of the Waskoosis Safe Shelter as they spoke about the resources offered locally.

Meanwhile, Mary Morin – the mother of Charlene Graham, the Flying Dust woman killed in a murder-suicide at Lions Park this past summer – also addressed the audience, while Graham’s brother, Delbert Aubichon, performed a song to close out the evening.

Among those pleased with the turnout was Benita Moccasin, family violence coordinator at the North West Friendship Centre.

“It went very well, was short and sweet and to the point,” Moccasin said. “It’s important to raise awareness about these issues because interpersonal violence and domestic abuse affect us all in some way, shape or form. It has negative impacts on individuals, families and communities. Home should be considered a safe place away from the outside world, but, unfortunately, for some people it’s not. It’s important to know the signs of abuse.”

Duriez also said, one of the main reasons the people involved wanted to hold such an event was to raise awareness about the fact violence has a spectrum.

“Sometimes we don’t tend to think of interpersonal violence as something that starts with disrespect and being spoken down to,” she said. “These are the types of things that happen before the physical abuse. Early awareness means we can intervene earlier and prevent it from getting to the physical violence stage where tragedies can happen.”

Going forward, Duriez said the plan is to make the walk an annual event.
“The goal of the committee members involved is to create an annual awareness event, and to be more proactive than reactive,” she said. “We really need to think about how interpersonal violence and its different levels and degrees can cause other problems. That’s when we begin to see there is a role for all of us.”