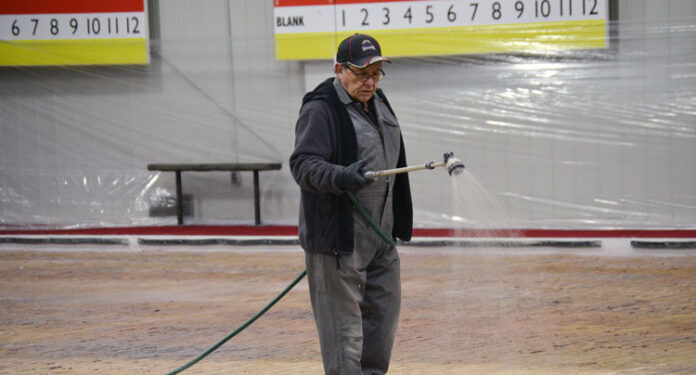 With the installation of a new ice plant at the Meadow Lake Curling Club now complete, local curlers are ready for a return to action.

According to club president Shannon Heddon, that will happen Monday, March 7. First, however, the club executive – after considering the input and advice from members – needed to ensure a modified season would be feasible given the recent circumstances.

“We held a meeting Monday night (Feb. 21) to confirm if we were going to continue with curling or not this season – to see if the interest is there,” Heddon said. “Sure enough, we have had enough teams express interest to go ahead with a six-week season.”

Heddon said this is good news, not only for curling enthusiasts but also for the club in general.

“We wanted to operate the plant now to make sure everything is functional so, when we fully start up again in the fall, there won’t be any hiccups,” she said.

The ice plant, which was made possible through financial assistance from the City of Meadow Lake, became a necessity for the club last June. That’s when fire destroyed the adjacent Meadow Lake and District Arena along with the on-site ice plant shared by both facilities.

The new plant was expected to be completed sooner, but there was a slowdown when it came to receiving certain parts.

“Throughout all of this, our number one concern and our number one priority was getting people back on the ice,” Heddon continued. “When we met in the fall about whether or not we proceed with a new plant or not, that was a major concern.”

Meanwhile, Heddon added, the club still has some financial hurdles to overcome.

“We know, with costs and whatnot, we are going to be operating on a tight, tight budget for the next few months,” she said. “There will need to be some additional fundraising to keep us afloat, but, in this case, the rewards outweighed the risks. With restrictions now lifted, everybody is able to come back and get some normalcy into their lives.”

The modified season will include ladies, men’s and mixed leagues.

“We are going to try to fit in a couple bonspiels as well, but we’re unsure what kind those will be yet,” Heddon said. “In the end, though, the board went with what members were asking, and we had a great response in terms of teams entering so we could carry forward with testing the plant out. Without the members standing behind us, we would not be able to operate until the fall.”

Among those looking forward to getting back on the ice in Meadow Lake is 15-year-old Josh Kirilenko, an avid curler.

“Between COVID-19 and the arena fire, I have missed curling the last two years,” Kirilenko said. “I am really looking forward to getting back on the ice. I have entered the men’s league with some friends, and have also entered a mixed team. I can’t wait to curl a few times a week, plus to do some practice in between.”