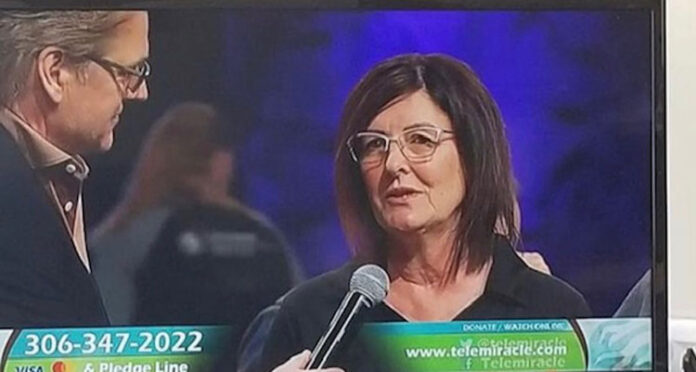 There may not have been a local event again this year, but Meadow Lake’s presence was still felt at the annual Telemiracle event held this past weekend in Regina.

Representatives from the Meadow Lake Kinettes made their way to Telemiracle 46 to present the organization with a cheque for nearly $7,000, money raised by the club in the span of only one week.

“We once again held an online auction where we posted a variety of items on Facebook and asked for donations,” explained Louise Slater of the Meadow Lake Kinettes. “We received 69 donations from businesses and individuals. There was some really great support, we ran the auction from Friday (Feb. 25) to Friday (March 4) and raised $6,910.”

Slater, accompanied by fellow Kinettes Julie Vandale and Alyson Hill, were among the many volunteers working at the Telemiracle show in Regina and, at one point, the trio took to the stage to present the club’s donation.

“What’s most important is how the money raised for Telemiracle helps so many people – almost everyone knows somebody who has benefited from the help of Telemiracle,” Slater said.

For more than 40 years, Meadow Lake held its own Telemiracle event at the same time as the major telethon. The local show was cancelled the past two years because of COVID-19 concerns, and, while she is hopeful it will one day return, Slater said it won’t make a difference either way when it comes to local support for Telemiracle itself.

“Even if there isn’t a local show, we plan to do a lot more fundraising and to raise a lot more awareness,” she said.

According to Meadow Lake Kinsmen member Geoff Barton, there were no local fundraisers organized by his group this year.

“Instead we encouraged everyone to call their pledge to the main Telemiracle show,” Barton said. “Overall, we couldn’t be happier with the record-breaking total raised throughout the weekend.”