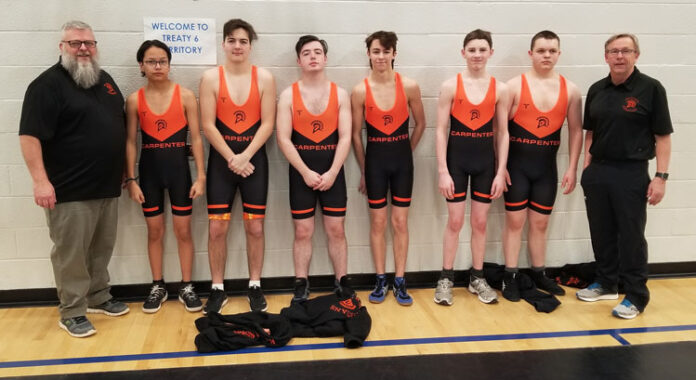 What appeared in the beginning to be a questionable season at best will end with wrestlers from Meadow Lake’s Carpenter High School competing for a provincial championship.

This past weekend, six CHS athletes – Isaac Fleury, Lucas Klaassen, Kevin Handspiker, Aiden Munroe, and brothers Scott and Nolan Fillion – competed at the Saskatchewan High Schools Athletic Association’s (SHSAA) regional championships in Outlook, SK. According to head coach Chris Brownrigg, however, it wasn’t an event he expected to see his team a part of this year.

“The team did not have an opportunity to compete at any tournaments all season long because of COVID-19 – we practiced as a team and, on two occasions, were able to have a joint practice with two other teams where they got to wrestle a few other people they didn’t know, but most of them weren’t in their weight respective weight classes,” Brownrigg explained. “We weren’t able to get very many actual matches.”

With the recent lifting of provincial restrictions, however, it allowed for tournaments to go ahead and for the CHS wrestlers to test their mettle against their peers from throughout the region.

“Things were not looking good early on, as this year was a rebuilding year at best,” Brownrigg said with regard to the early part of the season. “I was really proud of how hard the kids worked. Maintaining motivation to train when you don’t have the opportunity to compete is very hard.”

Brownrigg is also hopeful the team will be able to bring home some provincial medals, adding the squad came close to earning the regional championship for CHS.

“We thought we won regionals, but there was a miscount,” he said. “They gave us the regional championship plaque and the whole nine yards, but, when I got home, I looked at the results and there was a problem in the software program which gave us too many points. I got on the phone right away with SHSAA. Moose Jaw’s Albert. E. Peacock Collegiate was the team that deserved to win, so we will be handing over the regional plaque.”

According to Munroe, a Grade 10 student, it was a team effort that got him and his teammates to provincials, and he looks forward to the upcoming challenge.

“I received so much encouragement from the entire team,” Munroe said. “When on the mat, I could hear the team cheering me on and that gave me the confidence to finish the matches off strong. I’m looking forward to provincials, to my teammates cheering me on and me cheering on them. Hopefully we can all win medals.”

Munroe was inspired to join the CHS wrestling team after watching his older brother, Logan Boser, gain success in the sport during his time at the school.

“My brother was a pretty good wrestler and I want to be as good as him if not better,” Munroe said. “Once I got into it, it just hooked me.”