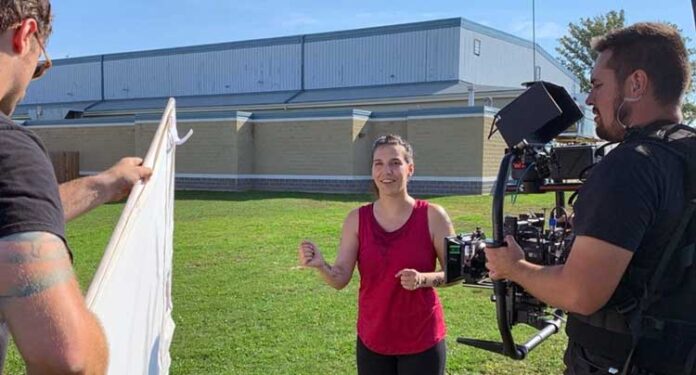 Former Meadow Lake resident Dakota Ray Hebert is living her dream, and now she will have an opportunity to share that dream with her family and friends here at home.

Hebert, who stars in the new movie Run Woman Run, will be back in Meadow Lake Monday (April 18) where she will make a special appearance at Aurora Cinemas during two special screenings of her film – one at 7 p.m. and the other at 8 p.m.

“I will be introducing the film and hosting a Q&A afterward,” Hebert told Northern Pride.

The movie will also be screened at Aurora Cinemas Wednesday (April 20) at 7 and 8 p.m. Unfortunately, however, Hebert will only be appearing Monday.

“I would love to be there April 20 as well, but I’m headed to Toronto for a screening as part of National Canadian Film Day,” Hebert added. “Still, I’m very excited for the film to be screened in Meadow Lake. It’s going to be really exciting, and I’m happy it’s showing more than once too.”

Directed by Zoe Hopkins, Run Woman Run is described as a dramedy about Beck (Hebert), a single mom who learns how to reclaim her dreams, family and honour her life, all thanks to an unlikely coach. Beck is goaded into running a marathon by the ghostly appearance of legendary Onondaga marathon runner Tom Longboat and, through running, gets her life back on track and runs to honour those she loves.

“It’s a beautiful film, it was amazingly written, Zoe directed a great piece of cinema and I believe people will enjoy it,” Hebert added. “There’s something in it for everyone.”

While she lived in Toronto at the time of filming, Hebert and her family now reside in Saskatoon. Although she’s been all over the country since the film’s release, she said the upcoming screenings at Aurora Cinemas will be an experience unlike any other.

“Meadow Lake is where I was born and raised,” Hebert said. “This is where I decided I would be an actor one day, and developed this dream of being in movies and TV shows. Being able to bring in not only the first movie I was a part of, but also the lead in is its own dream come true. I get to share this project with a lot of my loved ones and I’m really excited for that.”

Hebert went on to mention Bill Kresowaty, her Grade 9 drama teacher, noting he was the first adult to encourage her to pursue acting.

“I really hope he makes an appearance there too and is able to see the fruits of my labour,” she said. “Yes, every screening has been meaningful so far, but the lead-up to this one feels even more so because it’s in my hometown and at the theatre I spent countless hours at in my youth (when it was known as Dynasty Twin Cinemas). Since learning the movie would be playing in Meadow Lake, I have been in a weepy state. I am just so grateful.”

“Our goal is to provide entertainment to our customers, and what is more entertaining and exciting than seeing one of Meadow Lake’s own on the big screen?” Ambroziak remarked. “We’re very pleased to be able to bring Run Woman Run to Aurora Cinemas and to have Dakota on hand to to celebrate her achievement with family and friends.”

“It’s going to feel so good,” she said. “The first time I saw my face on the big screen was at the movie’s premiere in Halifax. I walked into this big theatre and it was so trippy to see my face up there. Then, at the end, when the title card flashed and it said ‘Dakota Ray Hebert’, I was like ‘Oh my God!’ I have spent so much time in that theatre in Meadow Lake watching movies and imagining what it would by like to be in one some day. Now it’s happening.”

A graduate of Carpenter High School, Hebert moved to Regina to pursue her acting career a decade ago.

“I auditioned for community theatre there, and then Globe Theatre had me audition for their conservatory program,” she explained. “I was the first Indigenous student in their 2012 program, and was a springboard for my career because I was introduced to so many theatre professionals through that program.”

From there, Hebert moved to Saskatoon to work for what is now known as the Gordon Tootoosis Nikaniwin Theatre.

“After that, I was booked,” she said. “I was told in theatre school I might be lucky to get one theatre credit per year on my résumé, but I was averaging about three or four. There were lots of opportunities, especially for trained Indigenous actors. There are so many Indigenous theatre companies popping up now, and so many companies wanting to hire more Indigenous people in order to diversify. It’s been outstanding. I’ve travelled across Canada two or three times, the U.S., to China, it’s been a journey… Now I’m trying to branch into more TV and film. Theatre is a lot of fun, but you’re always on the go and on the road.”

In addition to this, Hebert has her own YouTube channel titled Dakota Tries.

“It’s a channel where I try things for the first time,” she said. “It’s a dorky thing, but it’s what ultimately got me a co-host job on Crazy Like a Lynx on APTN. The producers heard of me as a bit of a comedy weirdo and were intrigued. I got that job which led to more people hearing about me and then, one day I woke up to this message in my in-box from Zoe Hopkins who said she was writing and directing this movie, and asked if I would be interested in the lead role.”

Run Woman Run was filmed in the Toronto area and wrapped just prior to the start of the COVID-19 pandemic.

Hebert and her husband, Dylan Jay Williamson, welcomed their son, Francis, into the world in November. Just like Hebert, her husband is also a standup comedian and writer.

“Standup comedy is still one of my favourite things to do,” Hebert noted. “It’s lots of fun.”

“I don’t know exactly what I’m allowed to say, but I will be involved in two TV shows this summer,” she said. “One will be as a minor character and another as more of a principle character. I wish I could say more, but I don’t want to get in trouble.”

As for advice she has for other young people looking to pursue their dreams in life, like the Nike slogan, Hebert said to “just do it.”

“Just go for it,” she said. “It’s going to be really scary, especially when it feels totally against the grain. You just need to believe in yourself.”