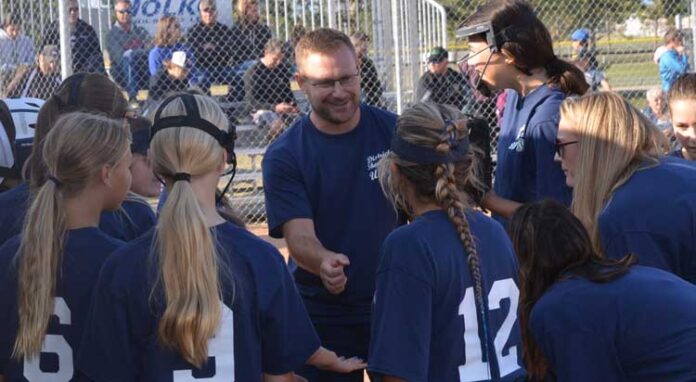 As far as his ability as a coach, Meadow Lake’s Davin Hildebrand has hit one out of the park.

Hildebrand, who coaches the Meadow Lake U12 Sox girls softball team alongside Amanda Dufresne and Blaire Taves, was recently named Coach of the Year by the River West District’s volunteer recognition program.

“I got a call a couple weeks ago from a lady from Rivers West letting me know I won the Coach of the Year award,” Hildebrand explained. “However, when I think about that, well, it’s in reality a reflection of having a team that had some success last season. We had a really good group of players with really great families, and two excellent assistant coaches.”

Hildebrand went on to stress he is far from the sole reason for the team’s success.

“All three of us coaches made the decisions and did everything together,” he said. “As noted, this award is more of a reflection of the team rather than of me alone.”

According to a recent social media post made by Rivers West officials, Hildebrand has served on the board of directors of Meadow Lake Minor Baseball for more than 10 years and, as such, recognized finding a way if keeping girls involved was important.

“Davin took the lead and started a new girls softball program,” the post reads. “The girls became interested in more competitive play, so Davin took over as coach with a long-term vision for softball. Being a very skilled coach, Davin dedicates time to seasonal planning, effective practices and game strategies. He is constantly thinking about ways to improve the girls’ experience and skill level.”

In an effort to challenge his team, Hildebrand set out to find teams of similar talent for the girls to compete against.

“He connected with Softball Saskatchewan, as well as others to inspire learning and to host skills clinics,” the Rivers West post continues. “The team ultimately entered and won the Softball Saskatchewan ‘A’ Northern Championships in Prince Albert (in 2021) and, for a first-time community ball team entering provincials, to have this result, is an incredible accomplishment and one to definitely be proud of. Davin’s time, his commitment to the team, his positive presence and leadership skills produced a fantastic year of the U12 Sox softball team.”

As for the award itself, Hildebrand has yet to receive the physical prize but believes Rivers West is working out the details in terms of a future presentation.

“This is a group of kids who really love playing ball,” he said. “They have connected so well as a group, and they enjoy being with each other which makes it that much more fun to come to the ballpark and to be around them, watching them do something they really enjoy.”