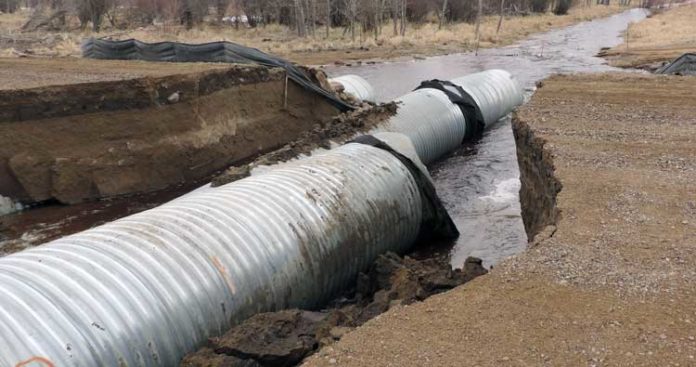 As of this week’s news deadline, repairs to Highway 26 between Goodsoil and Peerless were expected to begin following a recent washout that caused culverts to collapse.

“The contractor is on-site this week and will start work, preparing the site before installing new culverts,” explained Steve Shaheen of the provincial Ministry of Highways and Infrastructure’s communications branch.

It remains to be seen, however, exactly how long the work will take.

“It’s always difficult to tell (how long a project will take),” Shaheen added. “Weather always plays an important factor, but they are working now and will continue to work in order to get that road open again as soon as possible. I wish I had a timeline for you, but I don’t.”

In the meantime, a local detour remains in place. Motorists are being asked to use Emberville Road off Highway 55 to bypass the area in question.

“They just need to keep their eyes open for the detour signs and be sure to follow those,” Shaheen said.
The washout occurred on the afternoon of April 25.

“The culverts were performing well until sudden warm weather caused a quick melt, which, in turn, caused those culverts to fail,” Shaheen said. “Essentially, they just couldn’t handle that much water at one time. We see this sort of thing from time-to-time, unfortunately, particularly in the spring as things start to go. Whether it’s potholes or culverts, sometimes the amount of water trying to come through causes them to fail and then you have a collapse.”

Shaheen also said these culverts in particular were part of a highway upgrade that took place last year.

“I believe there will be some work continuing on Highway 26 this season, so they will be reinstalling these culverts,” he said. “The engineer is already looking into different options to make sure this doesn’t happen again.”

Shaheen also said, to his knowledge, the ministry has not received any feedback from area residents or motorists who frequent the area with regard to the collapse or the ongoing detour.

“As far as I know, we haven’t heard anything,” he concluded.

There is, however, slight concern according to Goodsoil mayor Don Eckel.

Eckel also said, considering the culverts were new, the collapse should never have happened in the first place.

“Last fall they had perfect conditions for putting in culverts, but something went wrong,” he said. “I believe it was a combination of not being finished properly and maybe the design wasn’t the greatest. It shouldn’t have happened, but I’m just glad it happened now and not when the road was finished. This is just an inconvenience, but if it happened later all hell would have broken loose. I just hope, when they get it done and, in future, there is better communication with us.”