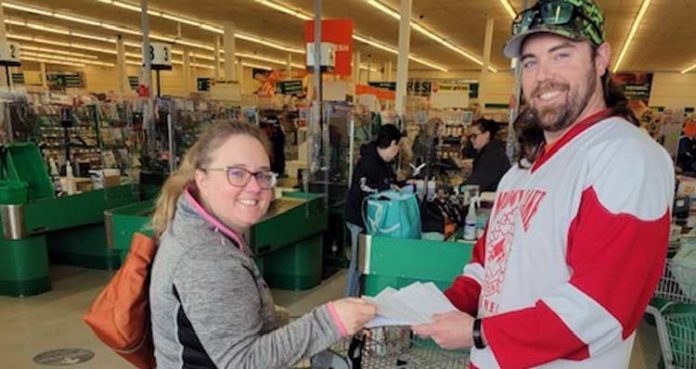 The Meadow Lake Kinsmen have two words of advice for everyone – be kind.

In celebration of the Kinsmen’s annual Day of KINdness, members of the local club visited several businesses recently to randomly hand out gift cards to unsuspecting shoppers.

“The club purchased $600 worth of gift cards from Extra Foods, the Meadow Lake Co-op, Home Hardware and Sandi’s Poutinerie, while the retailers donated additional gift cards as well,” explained Meadow Lake Kinsmen president Geoff Barton. “Funds and donations from our Safe Ride Home service paid for the Day of KINdness project. It was a simple gesture to say ‘thanks’ to the community for supporting the Kinsmen.”

Kin Canada celebrated its 10th annual National Day of KINdness Feb. 19. Kind acts included everything from sending an encouraging note, to shovelling a driveway, or making a donation at a local charity. Barton said, locally, the day had to be recognized more recently, specifically on April 2.

“It’s supposed to happen Feb. 19, but that schedule didn’t work out for us this year and we decided to instead do something a little later,” he said. “After purchasing the gift cards, we stood around the grocery stores and Home Hardware, and handed them out to people who happened to be shopping at these locations that day. As for the total number of cards we gave out, I couldn’t say. But, overall, it was about $1,000 worth.”

Barton went on to say the initiative was received positively by members of the public.

“It went over pretty well,” he said. “Usually, when we’re loitering in a grocery store, we’re trying to sell people tickets for something. So, there were a few people who thought that was what we were up to. But, when we told them what it was really all about and gave them a gift card, everyone was pretty happy about it.”

Barton went on to describe the initiative as the club’s way of giving back.

“Again, usually we are fundraising for something, and Day of KINdness is something we talked about doing for a number of years but it just never materialized,” he said. “This year we decided to make up for lost time. With pandemic restrictions lifted and people getting more out, this was something we wanted to try out.”

Among those to be presented with a gift card April 2 was Meadow Lake resident Sacha Munro.

“I saw the Kinsmen in their jerseys walking across the (grocery store) parking lot,” Munro said. “I knew they were up to something. What a pleasant surprise to walk into the store and to be greeted by these wonderful folks, and to be given a gift card. Honestly, it put a small on my face all day.”