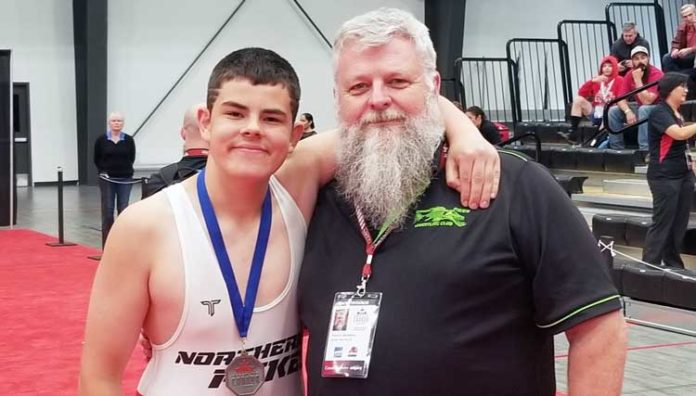 When Meadow Lake’s Noah Cappelle – a member of the Northern Pikes Wrestling Club – attended the 2022 Wrestling Canada National Championships in Calgary this past weekend, his goal was not to come home empty handed.

Cappelle, competing in the U15 Greco Roman 85-kilogram weight category, finished second overall to capture the silver medal at nationals.

“We only had two athletes attend nationals this year,” explained Northern Pikes coach Chris Brownrigg. “They both wrestled very hard, and came into it with very few matches because of the impact COVID-19 had on the early part of our season. Neither of them were pinned, but they were out-pointed in some of their matches. I’m definitely proud of them and the amount of training they put in. Both worked to improve their fitness and their weight, allowing them to get into certain weight classes.”

Cappelle, Brownrigg added, also competed in the freestyle tournament where he met four other competitors and finished fourth overall. In the Greco Roman event, there were two other wrestlers, and, as noted, he finished second.

“It felt really cool,” Cappelle said of his performance. “It was an extremely tough tournament – very nerve-racking.”

Cappelle has been wrestling since he was in Grade 4, but said he didn’t start to take the sport seriously until this past season. He is currently in Grade 8.

“I hope to keep wrestling for as long as I can,” he added. “I hope to win a gold medal at nationals next year, and to join the Carpenter wrestling team when I’m in high school.”

“Charleigh was in a pool of six and was very competitive in all her matches, but was a little less experienced than her opponents and then she suffered a rather serious hip injury in her last match,” Brownrigg reiterated. “But, they were able to take care of her, and she’s up and about and in good spirits.”

The national tournament marked the end of the 2021-22 club wrestling season.

And, considering Barden now resides with her family in P.A. and will wrestle with that club going forward, Brownrigg said nationals marked the last time he had the opportunity to coach a member of the Barden family.

“It was a bitter-sweet day for sure,” he said. “Now, I’m off to coach at the Canada Games in August.”