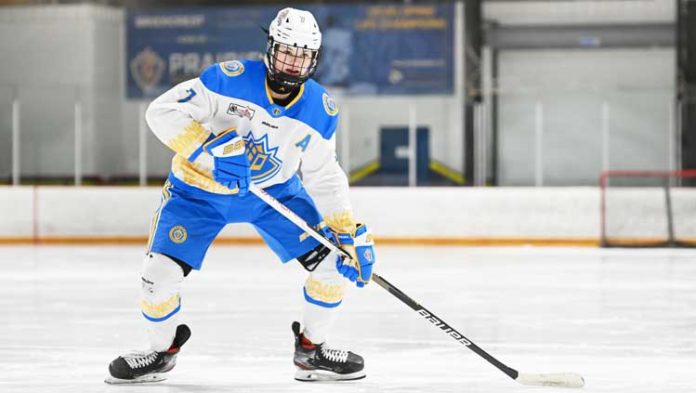 Ryder Ellis’ dream of one day competing in the Saskatchewan Junior Hockey League (SJHL) is one step closer to becoming a reality.

Recently, the Meadow Lake teen – who this past season suited up for the Prairie Hockey Academy of the Canadian Sport School Hockey League – was recently selected by the La Ronge Ice Wolves as the 30th pick in the 2022 SJHL draft.

“Friday (June 10) was the days of the draft, and I had a feeling I may be drafted – possibly in one of the later rounds,” Ellis told Northern Pride. “I was on my way to Calgary for a hockey camp when my dad told me I was drafted.”

At first, Ellis added, he was uncertain as to which team had selected him, but was quite pleased when he discovered it was La Ronge.

“I always wanted to be drafted by an SJHL team and possibly play in that league,” the 16-year-old continued.

Among those extremely pleased about Ellis being drafted is his father, Chris, who was also Calgary-bound when the news hit.

“I heard he was drafted but I didn’t know to where,” Chris Ellis said. “Then, through social media and people texting me, I found out it was La Ronge. We weren’t overly surprised because that team had spoken to us before and had shown interest in Ryder leading up to the draft.”

Just because he’s been drafted, however, does not mean Ellis will be a member of next season’s Ice Wolves roster.

“I still need to go to camp and see what happens there,” Ryder Ellis noted. “I could possibly make the team, but as a 16-year-old it’s tough to make it straight to the SJHL where I would be playing against people in their 20s. It’s a first step, though. I have to work hard on and off the ice. We’re still practising down here, so I’m on the ice every day and will continue to work toward the steps I need in order to make it to the next level.”

“I don’t know if he’s quite ready to play against 20-year-old hockey players yet, but there is the option to get called up and play games with La Ronge as he’s essentially property of that team now,” Chris Ellis said. “It was a tough decision for him to go away for school this year and to play hockey, but he did a good job. He’s developed a lot, grown a lot and we’ve all got what we wanted out of this year. It’s been a successful season for him. We’ve heard nothing but good things out of La Ronge, and I know he’s looking forward to getting down to work.”