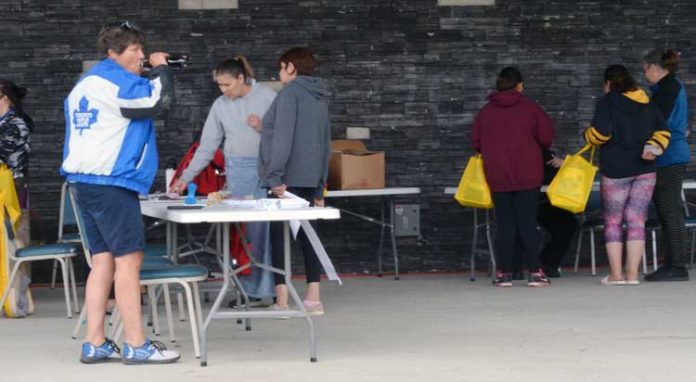 Emergency stations can arise at any time, at any place and when least expected.

This is an important message the City of Meadow Lake wants its residents to be aware of and, in an effort to ensure just that, a special community safety event was held for the public at Lions Park this past weekend.

“There was a bunch of different activities for all ages,” explained Joe Hallahan, the city’s community safety officer, when commenting on Sunday’s (June 12) gathering. “The parks and recreation department set up its bouncy castle for the little ones, we had the fire prevention trailer there from the Saskatchewan Association of Fire Chiefs, and, for the older kids, there was a slip and slide on the Lions Park hill. We also had the local search and rescue group on hand to do a mock search, a presentation from Environment Canada about severe thunderstorms, and there was a free barbecue along with numerous door prizes courtesy of the city and other sponsors.”

Sunday’s event was originally scheduled for early May as part of Emergency Preparedness Week.

“However, we weren’t able to go ahead with it at that time, so it was rescheduled for June 12,” Hallahan continued. “It turned out rather nicely, though, because it ties in with the ParticipACTION challenge currently being undertaken by the parks and recreation department. It was an opportunity to get more people out doing things.”

“In the past we held community events at the civic centre and other places, and the main goal of emergency preparedness or emergency management is to create a resilient community,” he stated. “Part of accomplishing that is by creating connections – connections with neighbours, with service partners within the community and, once you have a really good group of connections, if something were to happen, you can rely on each other in times of need and know where to go to get help.”

Among those to attend Sunday’s event in a virtual capacity was Terri Lang, an emergency preparedness meteorologist with Environment and Climate Change Canada. She made her presentation regarding severe weather via Zoom.

“I would have liked to have been there in person, but when it comes to the federal government we’re still not really travelling out to events,” Lang told Northern Pride. “I’m still working from my kitchen table after more than two years. What I did talk about, however, was severe weather safety for the summer. We’re well into severe weather time right now, so I spoke about what to do in case of hail, heavy rain, flooding, tornadoes and so on.”

Lang went on to say how grateful she was to be invited to speak at the Meadow Lake event.

“I feel privileged to be able to talk to people,” she said. “It’s a great opportunity, and I’m really excited when municipalities get their residents to be prepared. A lot of people see things on the news and think it can’t happen here. But, it can, and this is a way to get people prepared.”

Hallahan echoed much of this.

“We should always be prepared to look after ourselves for up to 72 hours if a large event was to happen in the community,” he said. “Having spare clothes, medication, important papers and so on in a bag which is easy to grab in case of evacuation is critical.”