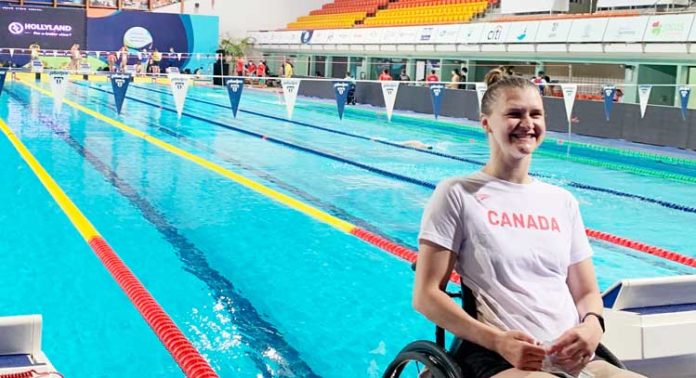 Former Meadow Lake resident Nikita Ens has proven she is among the best in the world when it comes to her chosen sport.

Ens, who now resides in Saskatoon, recently earned a silver medal at the 2022 World Para Swimming Championships which were held in Madeira, Portugal June 12-18.

“I qualified for worlds at the Canadian trials held in Victoria back in April,” Ens told Northern Pride.

During the event, Ens – who trains regularly with the Saskatoon Lasers swim team – competed in a series of swims, with varying degrees of success in each one.

“I started off with the 50-metre breast stroke and the 150-metre medley, and I placed fifth in both,” she said. “Next up was the 50-metre backstroke where I placed fourth, but also set a new personal best and a new Canadian record with a time of 1:08.70.”

In her fourth race, Ens competed in the 100-metre freestyle and placed seventh.

“The last race was the 200-metre freestyle, where I placed second and won the silver medal,” she added. “It felt great all around and I am so grateful for the support and continued encouragement from the communities of Meadow Lake and Saskatoon.”

This year’s outing marked Ens’ second time competing at the World Para Swimming Championships. The first time was in 2019 in London, England.

“This year was much more successful for me personally, however,” she noted.

Now that she’s back in Canada, Ens said it’s time to begin focusing on the next challenge.

“In the close future is the Canadian nationals event, this time in Montreal in August, and, after that, I have my sights set on Manchester worlds in 2023 and, hopefully, Paris in 2024,” she said. “I’ll maybe take a day or two off and then I’m back in the pool.”

While in Madeira, Ens also had a chance to experience her surroundings as well as the local culture.

“The majority of our time there was focused on the competition, but, on the last day, we had a bit of free time for sight seeing,” she said. “The island is beautiful, so if you ever go to Portugal I recommend Madeira.”

Ens, the daughter of Meadow Lake’s Rod and Monica Ens, earned a provincial track and field championship for Carpenter High School in 2006 in the senior girls shot put event. She was also a regular swimmer and even served as a lifeguard at the Meadow Lake Aquatic Centre before a motor vehicle collision just outside Meadow Lake on Highway 304 in February 2014 left her confined to a wheelchair. In the years that followed, she continued to embrace her love for swimming, and has since gone on to compete around the world including as a member of Team Canada at last year’s Paralympic Games in Tokyo, Japan.

As for words of advice for others looking to achieve their dreams, Ens has a few.

“Keep on pressing through, even when things get rough because you never know where your efforts will lead,” she said.