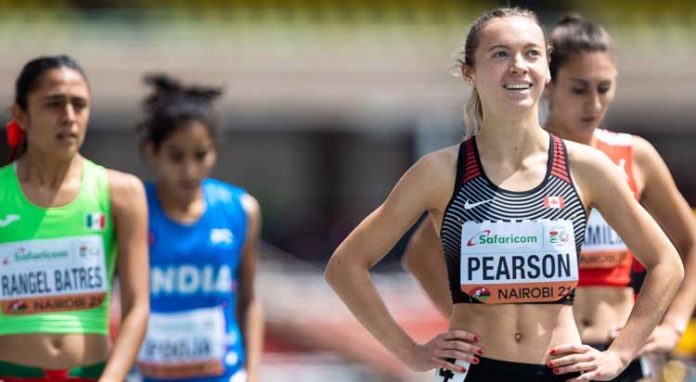 Avery Pearson is on top of the world… again.

The Meadow Lake athlete, who this fall will be entering her second year of kinesiology studies at the University of Saskatchewan, departed for Cali, Columbia this week where she will represent Team Canada in the 800-metre event at the 2022 World Athletics U20 Championships. This marks Pearson’s second year competing on the world stage, as she placed seventh overall at last year’s world championships in Nairobi, Kenya.

“It’s the same track meet, but my second year having the opportunity to attend,” Pearson told Northern Pride prior to leaving for Columbia. “I’m leaving July 28. The athletes from across Canada will meet in Miami (Florida) and then fly to Columbia. The actual track meet is Aug. 1-6, and we return Aug. 8. We’re not staying as long this year as we did in Nairobi last year. I won’t be gone as long this year.”

Overall, more than 1,500 athletes from all continents are expected to compete at this year’s championships.

“Last year I made it through the heats, semi-finals and into the finals and finished in seventh place,” Pearson continued. “It’s going to be a lot different this year. I believe the team atmosphere will be different as we have more than double the amount of athletes – about 33 this year whereas last year it was 14. As for the track meet itself, it will be a little more competitive because some of the bigger countries – such as the U.S. for instance – did not take part last year, but will be there this year. I am expecting the competition to be tougher, so my goal is to make it through the heats and, of course, run a personal best. This way, even if I don’t make the final, I will know I ran as fast as I could.”

Pearson also said, even though the main focus of her time in Columbia is the competition, it’s still exciting to visit a part of the world she has never been to before even if there is little to no time for sight seeing.

“Last year we were in Nairobi for quite a while before and after the competition, but this year we’ll mostly be at the track,” she said. “When we were in Kenya we didn’t do much touristy stuff either, but still got to see some of the city because we travelled by bus to and from the track each day.”

As for the training and preparation needed prior to the event, Pearson believes she benefited from having the opportunity to compete in indoor track and field while at the U of S.

“I feel I came into the outdoor season more fit than I did last year,” she said. “More recently, I have been in Meadow Lake training with my dad (Daryl Pearson). We’ve been following my U of S coach’s training plan, which has been very intense, I’ve been doing a lot of speed work and strength training.”