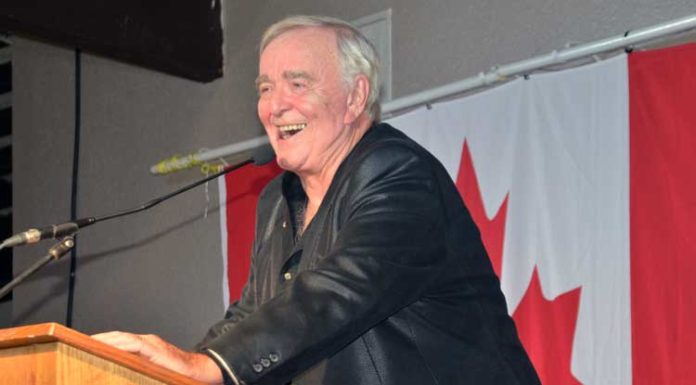 He may be a retired Air Force member, a former television game show host, actor and entertainer, but one of Blake Emmons’ proudest accomplishments is helping to establish the Wounded Warriors Weekend Foundation, a group that strives to bring together veterans and first responders challenged with PTSD. Recently, Northern Pride spoke with Blake about Wounded Warriors, Telemiracle and some of his other endeavours.

Q: Tell me about the Wounded Warriors Weekend Foundation.
A: This is our 10th year and I can’t find enough words to express the gratitude we all feel toward our people in Saskatchewan who have supported us. This week, in Meadow Lake, we have veterans, first responders, people from your neighbourhood, from across Saskatchewan, from as far away as Nova Scotia and beyond. Wounded Warriors came from Remembrance Day – watching the service in 2012 and thinking how much we do for those who made the supreme sacrifice, but also thinking, ‘what about me? What about my buddies who have post-traumatic stress?’ That’s how the idea started and, over the past 10 years, we have had more than 2,000 of our veterans and first responders attend all of our events. It’s been awesome.

Q: What takes place during one of these events?
A: The most important thing that takes place is the participants themselves find out they’re not alone. PTSD is a mental health challenge and, when you’re by yourself, you can get depressed pretty quickly. The second thing they discover is it’s OK not to be OK. We get together and we pretend to fish, we pretend to golf. I say ‘pretend’ because so many of them haven’t done these things before. The participants help each other heal by sharing their stories with someone who understands.

Q: You are also one of the founders of Telemiracle, correct?
A: Yeah! At the time, a few other people and I had a meeting in Saskatoon, one thing led to another, they got the Kinsmen together and we did the very first one. I helped them get the producers, there was no script, and the audience was awesome. I love what they’re doing these days… They have continued and done things we never dreamed of doing. They mean well and the production is amazing. Back then, we did things by the seat of our pants – it was fun.

Q: You also made a brief appearance in an episode of The Golden Girls. How did this happen?
A: I did a couple of them, actually. I met Bea Arthur at a telethon in Iowa. We hit it off and she told me I needed to come to L.A. I lived with Bea Arthur for a year, which was great. It was actually me who talked her into doing the pilot for The Golden Girls. I was also the one who talked her into coming up to Canada to do the London Drugs commercials… I was there when they shot the pilot for The Golden Girls. At one point Bea suggested I come and do (an episode) and I did two. In one I played a cop and in another I do the thing where I’m in the bar and say, ‘Hi, Blanche’. I also did Nashville 99, a series with Jerry Reed and Claude Akins… whatever I wanted to do, I did. I hosted the game show (The New Chain Reaction) but left when they moved tapings from L.A. to Montreal. My music career has been good to me. My entire life has been an adventure. I haven’t grown up yet, but I have discovered getting old is a gift. You get to look back and laugh, and, honest to God, I have not made any mistakes in my life. However, I’ve had a lot of learning experiences.

Tell me about your family.
A: I left home when I was 11 and I never went back. I have a lady, Darlene, from Saskatchewan… My Darlene, I can’t say enough about her. We’ve never had an argument in all the years we’ve been together. Life is good.