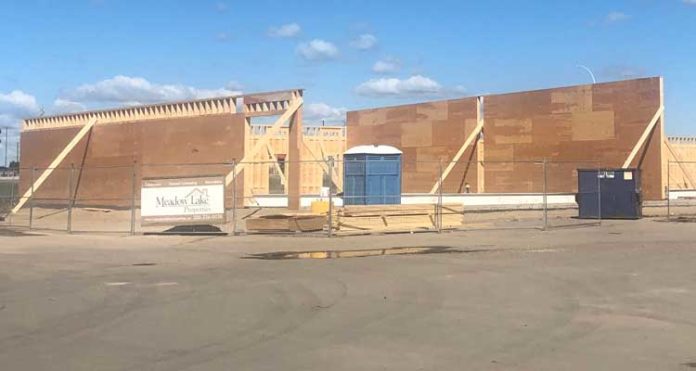 “That’s the reason we like small towns. When you do a good job, people don’t need to leave… You just need to offer the type of business or service people need and to make it look nice.”

These were the words of Matt Stokes, a partner in Town Centre Properties – the Edmonton-based company that owns the Meadow Lake Mall – when commenting on the facelift the building received last fall. It’s a statement, however, that could also apply to the company’s latest endeavour, the construction of 12,000-square feet of additional retail space in the mall parking lot.

“Sorry about the mess, but we think it’s going to be better than what was there in the past,” Stokes said. “It was just a gravelly area, but it was an obvious place to build a secondary building at the shopping centre. What we’re doing is building a first-class retail building there. It’s going to look like a modern, retail building as you would see in any city. It will be similar to the look we gave to the front of the mall – stone columns, gooseneck lighting, a wood tone facia, it will be similar to that.”

According to Stokes, each bay within the structure will be broken down into about 2,000 square feet.

“We’re hoping for lots (of storefronts),” he added. “We have 50 per cent of the space currently leased. One tenant has 4,000 square feet and the other has 2,000. We have 6,000 left which I am planning to chop up into 2,000-square-foot bays. It depends what people want – we can go a little bigger or a little smaller. The nice thing is this building will fit between those two drive aisles. the mall doesn’t lose any parking and the drive aisles remain as they are.”

Stokes anticipates the building will be completed soon with the tenants who have already signed on taking possession of their respective spaces this fall. One confirmed tenant is Pet Valu.

“Yes, Pet Valu is taking 4,000 square feet,” Stokes noted. “They’re going to be on the south corner of the building. Pet Valu is an interesting company. They will open that store as a corporate store and then look for franchise opportunities. If there is someone local who wants to take it on as a franchise, they’ll do that. We’ll hand the space over to Pet Valu in October and they’ll probably take about three months to do their work in order to hopefully own by this winter.”

“They’re a first-class operator,” Stokes said. “We have them in our shopping centre in Slave Lake, AB, and they are nice stores. The only way we would do cannabis is if it looks clean. We’re OK if it looks like a bank.”

Going forward, Stokes is excited about what other potential businesses could eventually fill the vacant spaces within the new building.

“The northernmost bay could have a drive-thru, so it could possibly be a quick-serve restaurant,” he said.

Stokes also said he and his company are privileged to be contributing to the local business community.

“When I come into Meadow Lake, it’s under-retailed compared to similar sized communities in Alberta and Saskatchewan,” he said. “I believe it comes down to the real estate. If I’m a first-class retailer and I want to come into Meadow Lake right now, where do I go? There is no place to go. Meadow Lake is a great market. It’s the regional trade centre for this part of Saskatchewan. People come here to shop.”