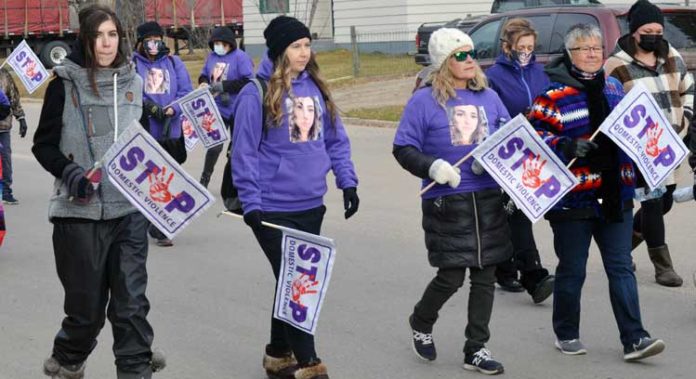 “Make it our business – time for change.”

This is the slogan attached to an upcoming three-day event organized by the Meadow Lake Tribal Council’s (MLTC) family wellness outreach program designed to raise awareness about domestic violence and the impact it can have on people and communities. The event takes place Aug. 28-30 and will include a five-kilometre walk/run at Lions Park, guest speakers and information sessions at the Meadow Lake Civic Centre, a family violence community walk and more.

“Our family event begins at 3 p.m. Sunday, Aug. 28 at Lions Park and will not only serve to raise awareness about domestic violence, but will also bring some healing and reconciliation to families,” explained event organizer Patricia Main. “Then, on Monday (Aug. 29), a number of people, including local leaders, will be coming to the Meadow Lake Civic Centre to speak and to share their knowledge.”

Monday’s gathering will feature guests from the Federation of Sovereign Indigenous Nations (FSIN), representation from the City of Meadow Lake, the RCMP, Victim Services, comments from MP Gary Vidal, MLTC leadership and others.

Meanwhile, on Tuesday, Aug. 30, the community walk gets underway at 11 a.m., starting at the civic centre and ending at Lions Park.
According to Main, the entire event is being held in honour of the late Charlene Graham and all individuals experiencing family violence.
“I’m sure everybody is aware of what took place Aug. 30 of last year when (Flying Dust First Nation member) Charlene Graham was killed in a murder-suicide at Lions Park as a result of ongoing family violence,” Main noted. “Our whole campaign will be focused on the strategies and approach when it comes to prevention… Domestic violence doesn’t look at colour, at how much money you make, where you come from.”

Main went on to say people have been silent on the issue of domestic violence for far too long.

“People have often chosen not to make it their business because they don’t want to have anything to do with it, but we need to begin to make it our business and to bring our whole community out,” she said. “Again, this isn’t just an Indigenous issue, it can happen to anyone. But, what can we do to prevent this so it doesn’t happen in our community or other communities again? Hopefully, this event will help give people some tools and some information to help answer that question. For too long we have pushed it underneath the rug.”

Someone who agrees with Main’s outlook on the issue is Graham’s mother, Mary Morin.

“My daughter lived in a domestic violence relationship for 16 years,” Morin told Northern Pride. “I cannot bring her back, but I can be a voice for her and reach out to others who may be living in a violent relationship. Domestic violence has been something that has been hidden behind four walls. It’s time to make it our business and bring more awareness to the public.”

Morin went on to say too many women are going missing.

“Some of them have no choice but to flee their homes and change their identity,” she added. “Nothing is being done and it’s time for us to step up and speak for ourselves. I would like for the public to know this is real. It happened in our community. It happened in my family. It’s time for intervention and prevention.”

She also echoed Main’s comments about the need to educate the public about domestic violence.

“Let’s make it our business,” she said. “This traumatic event has had a huge impact on our lives. It took my daughter’s life. Don’t let it take yours. It’s time to break the silence of domestic violence.”

In closing, Main stressed the importance of as many people as possible taking part over the three days.

“I encourage people, when they do take part, to wear purple,” she said. “Everybody is affected in some way or another by domestic violence, and we, as a community, need to begin talking about it.”