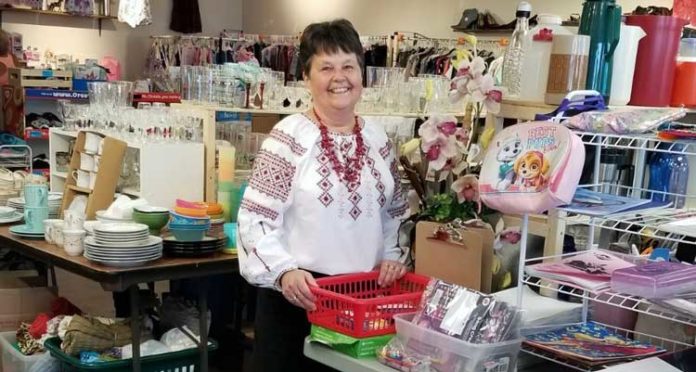 A Saskatoon woman with ties to Meadow Lake is doing her part to make life a little easier for displaced Ukrainian citizens arriving in Canada.

Nettie Cherniatenski, who grew up in Meadow Lake, opened Baba’s Closet earlier this year, a Saskatoon-based service that supplies refugees from war-torn Ukraine with clothing, school supplies and everyday household items in an effort to help them adjust to their new surroundings.

“As we all know, the war in Ukraine started Feb. 24,” Cherniatenski remarked. “I cried my eyes out for the first couple of days, as Ukraine is very close to my heart because my dad was born there. When he came to Canada, he settled shorty thereafter in Meadow Lake. Two days after the war started, I had a calling. I was standing in my kitchen, and I had a calling telling me, ‘Nettie, you’re going to do this.’”

It was this “calling” that encouraged Cherniatenski to gather clothing and household items, and distribute them from her garage.

“How, what, where, when, how long or any of those questions were not even answered,” she added. “For close to 20 years prior to this, I used to collect clothing and send it to the orphanages in Ukraine, so I figured this endeavour would be much the same.”

However, Cherniatenski began to advertise her service and, within a week, had people dropping off carloads of clothing.

“After about two weeks, I realized I wasn’t going to be able to continue doing this out of my garage because it was filling up much too quickly,” she said. “So, I started driving up and down the north end of Saskatoon looking for a building where I could distribute my items from. I pounded the streets left, right and centre.”

After temporarily securing a spot on Miners Avenue, Cherniatenski’s operation continued to grow by leaps and bounds, and thus the search began for yet another, even larger location.

“One day a lady came in and said she wanted to help me,” Cherniatenski said. “I agreed, and so we went to look at a few warehouses. When I found one I felt would work the best, she said she would sign a lease contract for one year for me. The lady has remained anonymous, but I can say she doesn’t have any ties to Ukraine at all. She just wanted to help.”

“Since getting set up here things have been going very well,” Cherniatenski noted. “The doorbell is ringing constantly. I started off by having one (refugee) family arrive every other day and now have seven, 10 and sometimes even 13 families each day. It’s overwhelming.”

Cherniatenski does have assistance, however. Close to 20 volunteers help out at Baba’s Closet each day.
“The warehouse is more than 3,000 square feet and includes everything from linen, housewares, clothing, you name it,” she said. “All the donations come from Saskatoon and area. The staff separates everything and makes sure it’s good to put on the shelves. If it’s not good enough to put in my home, it’s not good enough to put on the shelf. When the displaced Ukrainians come to Saskatoon before branching off to Meadow Lake, Spiritwood, North Battleford or wherever, they can come in here and can choose whatever they want free of charge.”

“They’re just in awe when they come in,” Cherniatenski said. “They come in, look around and many of them can’t believe just how willing Canadians are to help them. They often pick up the basics like hygiene products and toiletries. Once they stay with a host family for two weeks or a month, they have to move on, get a job and get their own place. That’s when they’ll come back and pick up bedding, dishes, pots, pans, appliances, towels, everything they need for their new apartment. They can also come back and shop any time as needed.”

Cherniatenski also said close to 40 bicycles have been given to Ukrainian children while, more recently, children have also been provided all the back to school essentials.

Among those Cherniatenski has helped is Tetiana Chudiiovych, a Ukrainian refugee who arrived in Canada earlier this year with her 11-year-old daughter and seven-year-old son.

“It’s very helpful to us to be able to come to Baba’s Closet and take all we need – all the necessities,” Chudiiovych said, adding – when she first arrived in Canada – she did not take too much in the hopes the situation in her home country would quickly improve. “We hoped the war would quickly be over, but nothing has really changed and the war continues. I want my children to be safe.”

Chudiiovych is also optimistic for the future.

“Soon we will have victory, but, with all the sirens and shelling that is happening in Ukraine, I didn’t want my children to be traumatized,” she added.

She also appreciates Baba’s Closet so much she now volunteers there.

“I wanted to be a part of this,” she said. “I know two languages – English and Ukrainian. They (fellow refugees) can talk to me, and I can help them.”

The lease at Baba’s Closet’s current location, however, is set to expire this spring.

“I’m done at the end of April because, as I said, the lady signed a lease for one year,” Cherniatenski said. “I am concerned there will still be a need (after that time), but I can’t worry about it. I have looked after the bulk of them who have come through here.”

Meanwhile, even though she left Meadow Lake in 1972, Cherniatenski still has a strong connection with the community.

“I lived there for 20-plus years,” she said. “My parents (John and Olga Cherniatenski) moved there in 1954. I visit their graves every year. I also keep in touch with as many friends from Meadow Lake as I can.”