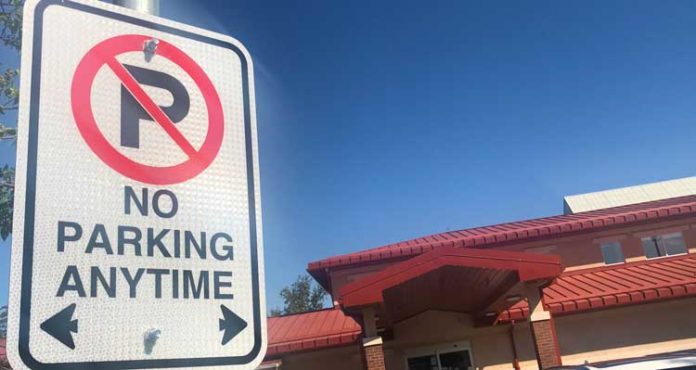 The ‘no parking’ signs unexpectedly erected outside the Meadow Lake Hospital earlier this year will remain in place, at least for the time being.

During this past Monday’s (Aug. 22) city council meeting, administration presented a timeline as it pertains to a review of the city’s traffic bylaw and the parking situation on 8th Avenue West. The timeline features five phases and takes into account current staffing levels and the available time of relevant staff members.

“I believe there was a comment made (at a previous council meeting) about phoning the hospital to see what their thoughts are on this,” remarked councillor Mauri Young. “Was that ever done?”

City clerk Ferne Hebig said this has not happened as of yet, noting it would be part of the timeline’s second phase. Mayor Merlin Seymour, meanwhile, echoed Young’s comment stating there was also to be a discussion with local ambulance personnel to gain their input on the situation.

“I was just wondering if that had been done, but I guess it’s part of Phase 2,” Young said.

Phase 1 of the timeline will feature an internal review, which is expected to be completed by Sept. 30. The bylaw enforcement and public works departments will review past issues and concerns that led to the ‘no parking’ signs being approved in the first place. The review will also identify current and potential issues, gaps, risks and concerns.

The second phase will include community engagement and is expected to be completed by Oct. 28. The city plans to develop and proceed with a public engagement survey on perceived or actual parking issues in this area. Invitations will be sent directly to local residents encouraging them to participate.

Phase 3 includes a cross-jurisdictional scan, which will be completed by Nov. 18. During this phase, the city will obtain feedback with other stakeholders and jurisdictional bodies including emergency services.

The final phase, providing a full report to council, should be completed by Dec. 29 and ready for council to debate and decide upon at its first meeting in January 2023.

“I guess we’re not enforcing this (parking restriction) right now, are we?” asked councillor Tom Harrison.

Both Hebig and city manager Diana Burton said the ‘no parking’ rule is indeed being enforced at this time.

“The signs are up, so we’re asking people not to park there,” Burton said.

The ‘no parking’ issue came to the council table when Young brought it forward June 13. At the time, she questioned why ‘no parking’ signs were suddenly in place along the north side of 8th Avenue outside the hospital. According to Hebig, back in 2016, an amendment was made to the city’s traffic bylaw to make that side of the street ‘no parking’. The amendment, which was approved in August 2016 takes into account the north side of 8th Avenue from 3rd Street West to Centre Street. However, signs restricting parking along this stretch were never put in place until six years later when, earlier this year, they were finally ordered and subsequently erected.

At council’s July 25 meeting, councillor Marty Bishop brought forward a motion asking for a full report and recommendations for council with research and assessment on a series of options regarding the 2016 traffic bylaw amendment.