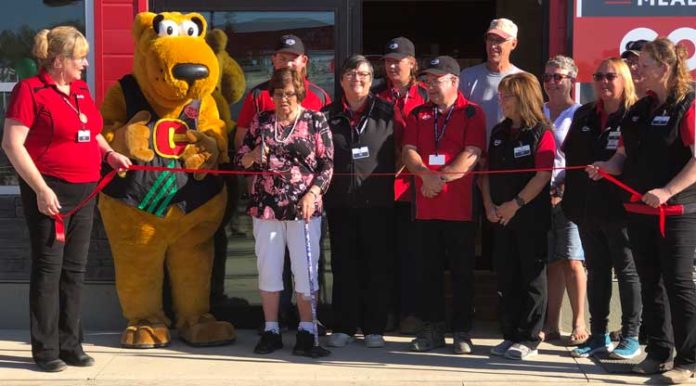 A new, state-of-the-art shopping experience is officially up and running in the Village of Goodsoil.

Although it had already opened its doors to the public in mid-June, a grand opening celebration was held for the new Co-op store in Goodsoil last Friday (Aug. 19) complete with an official ribbon-cutting ceremony, community barbecue and comments from invited guests.

“We are excited and very proud to have this offering in the community of Goodsoil for all of our members and future members,” remarked Caralee Strome, general manager of the Meadow Lake Co-op. “It’s also a relief to have the store open given everything that’s been happening in the community of Goodsoil in terms of the ongoing highway construction project. We’re very glad we were able to get the majority of our construction done ahead of time.”

The new store, which offers not only grocery items but a variety of other products one would normally find at a Co-op convenience store and service centre, is located adjacent to the site of the former Co-op store. That building was demolished prior to the new location’s launch this summer.

“This (new store) is something that was on the radar for quite some time,” Strome said. “We knew the old building was nearing the end of its lifecycle. A decision had to be made to either renovate the existing building or look at building something new. There were numerous studies, a market analysis, and feasibility studies to determine what would be the right move for both the community and for the Co-op. We decided on a plan and awarded the construction contract in June 2021. But, we had been looking into it a good year prior to that.”

The previous Co-op building served the people of Goodsoil for several decades.

“It was very encouraging to see so much support from the community,” Strome noted. “We also had representation from the Village of Goodsoil, the deputy-reeve from the RM of Beaver River, as well as Desnethé-Missinippi-Churchill River MP Gary Vidal.”

Vidal said, in small communities like Goodsoil, large infrastructure projects like the new Co-op store mean so much.

“It is businesses like this that make a town vibrant by bringing people together,” he said. “The whole Co-op team deserves credit for their hard work and vision in getting the job done. Congratulations to all.”

Strome, meanwhile, said the Co-op looks forward to meeting its customers’ needs now and into the future.

“Our team in Goodsoil, including store manager Jessica Gillett, have been and continue to be just excellent,” she said. “How they came together and were right there throughout our setup, we would have not made it through without their help.”