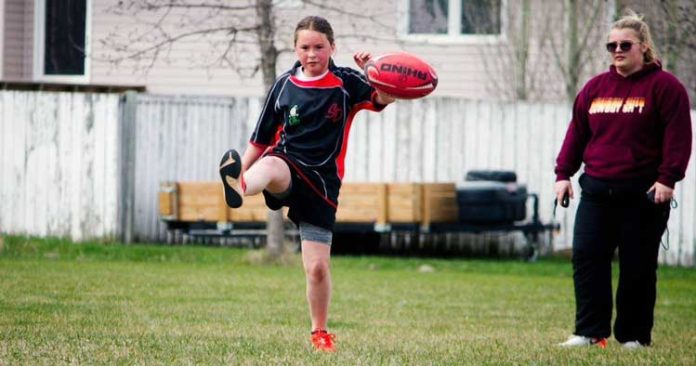 You can’t keep a good rugby team down.

Just ask the Meadow Lake SheDevils who, after overcoming two years of setbacks because the COVID-19 pandemic, recently wrapped up a highly successful 2022 season.

“To rekindle interest in rugby, the SheDevils combined with the Northern Pikes Wrestling Club to host a multi-sport camp in the fall of 2021,” explained SheDevils head coach Rufas Crawford. “Wrestling, rugby and Olympic weightlifting were the three sports highlighted over two days. There was also a nutrition specialist at the camp who educated the athletes and guided them in the kitchen to prepare a great lunch.”

Crawford went on to note, the athletes who came out were younger than expected.

“But, we adapted our programs and had a great weekend,” he said. “We received such positive feedback, the SheDevil coaches decided to host a few more fun events. A SheDevil bus loaded up with even more curious athletes and spent the day at Kimball Lake. We introduced the girls to some rugby drills, but most of the day was spent playing games, going on a nature hike, and having a wiener roast.  We also hosted a Halloween/rugby party – rugby drills in costumes.”

These events, Crawford said, sparked enough interest to start up a new team, so the SheDevil U14 girls team was born.

“We began indoor practices in late February and our numbers continued to grow,” he said. “By the time the weather warmed up enough to play our first game, we had more girls registered than Prince Albert, Saskatoon, and Lashburn combined. Unfortunately, the low enrolment in other rugby centres meant finding a team to play was going to be difficult. We were forced to play inter-squad games at our home tournament. When we traveled to Lloydminster for games, we had to share our players with other teams with so both sides had enough players to compete.”

Crawford also said the SheDevils had to travel a long way to play in tournaments.

“We entered two co-ed tournaments in Dauphin, MB and Regina,” he said. “Rugby Canada allows U14 rugby games to be co-ed. We quickly learned co-ed is often a girls team playing against an all-boys team. The SheDevils overcame their fear of tackling boys and were soon kicking the boys’ butts.”

The team also travelled to Brandon, MB for the Manitoba/Saskatchewan tournament.

“We lost a very close game in the final,” Crawford recalled. “Still, it was a very successful year for a group of girls who had never touched a rugby ball until six months prior. In the meantime, we continue to recruit for both our flag rugby program and our tackle program. We now have 16 coaches in five different schools trained to be flag rugby coaches. We are always looking for anyone interested in coaching/volunteering for our tackle program too. Next season is looking to be our biggest season ever.”