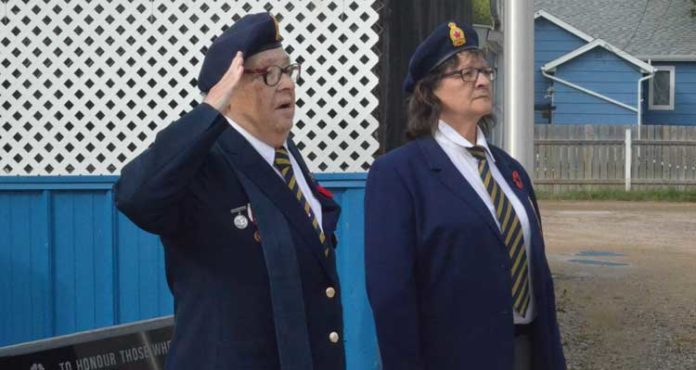 As Great Britain and the world continued to mourn Queen Elizabeth II on the day of her funeral, her memory was also honoured right here in northern Saskatchewan.

“It is our privilege to host this memorial tribute to Her Majesty, Queen Elizabeth II,” remarked emcee Alloha Twanow when addressing the small crowd in attendance.

Following the playing of The Last Post and two minutes of silence, a prayer was read by Legion padre Flo Campbell.

“We remember our late monarch, Queen Elizabeth II,” Campbell said. “We pray, Lord, You will bring her into everlasting life, that You will give her rest and peace, and, Father God, we pray you will be with all those who mourn. We thank You for her life of service and dedication until the very end. We thank You for her qualities and we ask, Lord, You will guide us as members of the Commonwealth and leaders of all nations, to do our best to honour her, her memory and to follow in her example to live in peace and happiness.”

A wreath was laid on behalf of all veterans, serving members and Legion members by Branch 76 president Joanne Carter, while Judge Bryce Pashovitz laid a wreath on behalf of Meadow Lake community members.

“Here, throughout the Commonwealth and in all parts of the world we mourn the loss of our beloved Queen,” Carter said. “Throughout her life, Her Majesty was an inspiration and example to all. Queen Elizabeth had a life well lived, and she is mourned deeply following her passing… Admiration and respect became the hallmark of her reign. We pay tribute to the Queen’s memory and we honour her life of service. King Charles III will continue to lead by her example, as he has dedicated his life to service as well. May you rest in peace Queen Elizabeth, long reign the King.”

Queen Elizabeth II passed away Sept. 8 at the age of 96 and, following a 10-day mourning period which saw the former monarch lie in state at Westminster Hall, her funeral was held Monday (Sept. 19) at Westminster Abbey.