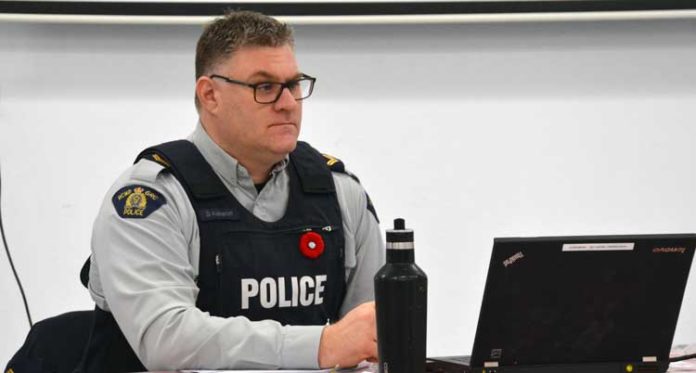 A new, yet familiar, face is taking the reins at the Meadow Lake RCMP detachment.

Sgt. Dean Kabaroff, who previously served for more than four years in Meadow Lake, has returned to assume the role of acting detachment commander. Kabaroff will assume the position in mid-October, following the departure of S/Sgt. Ryan How.

“S/Sgt. How is moving on to a different section, and I was fortunate to have a lateral comeback from Biggar, SK where I served as detachment commander for the past two years,” Kabaroff told Northern Pride. “I was asked if I would be interested in returning to Meadow Lake, as I had served four-and-a-half years here as a corporal before working in Green Lake for a year-and-a-half.”

Kabaroff said it wasn’t a difficult decision to make.

“Meadow Lake is home for my family and I,” he said. “We jumped at the chance to come back, and we’re excited to be back. We want to be here. We want to be part of the community. We want to live and be active and engaged in this community.”

Kabaroff’s first shift back in Meadow Lake was Sept. 12.

“We love the area, we love the North,” he added. “I personally enjoy working within the city, as well as with the two First Nations of Waterhen Lake and Flying Dust. In the past we had a good working relationship with both of their communities, and I feel I understand their needs, traditions and culture.”

As for specific goals he would like to achieve during his time in command, Kabaroff said he hasn’t thought that far ahead as of yet.

“It’s been a busy time coming back and getting used to the detachment again, but, obviously, I want to continue to have strong relationships with the city, the rural municipality and the two First Nations we police,” he said. “Being open, honest and transparent is important. From what I can see, we have an excellent young group of constables here and experienced corporals, so getting them out and engaged in all community events is important to me.”

“I hope to pass on to our members here the importance of getting involved with each community,” he said. “We need to be visible in a positive way in the community. I’m just getting my feet wet again, but my family and I are extremely happy to be back and I look forward to whatever challenges may come.”

As for How, he has accepted the role of regional manager of the Saskatchewan Emergency and Response Teams in the northern area of the province.

“I’ll be working with the newly created crime reduction teams and the warrant/apprehension team as of Oct. 17,” How said. “This role is not a promotion and is at the staff sergeant rank.”

How also said leaving the Meadow Lake detachment was not an easy decision for him to make.

“I didn’t achieve everything I had hoped to when I came back, but I know it is in very capable hands with Sgt. Dean Kabaroff leading now,” he said. “Over the last two years, we have finally achieved sustainable 24-hour policing at no further expense to the city, and are seeing a consistent decline in violence and even overall calls for service. I can’t credit the members here enough for battling through the gang violence of 2020-21, the uncertainty of COVID-19, and severe staffing shortages. Meadow Lake has some of the best young police officers in the country without a doubt. Seeing these members develop and succeed will be what I miss most about detachment work.”

How went on to state his decision essentially came down to family and what is best for his wife and kids.

“Detachment policing is incredibly rewarding and my true passion, but it takes a toll on everyone eventually,” he said. “When this opportunity came up it was initially posted to Prince Albert. I wasn’t interested in moving my family, so, fortunately, I was allowed to stay in Meadow and take on the new role here. Meadow Lake is home and we have made life-long connections here. Dean is very similar in that he wanted to return with his family. It’s difficult to police a community for too long because of the personal connections we make, but it also makes us deeply invested in making the community better for everyone. I’ve worked with Dean a lot over the years and I know Meadow Lake is lucky to have one of the best leaders around.”