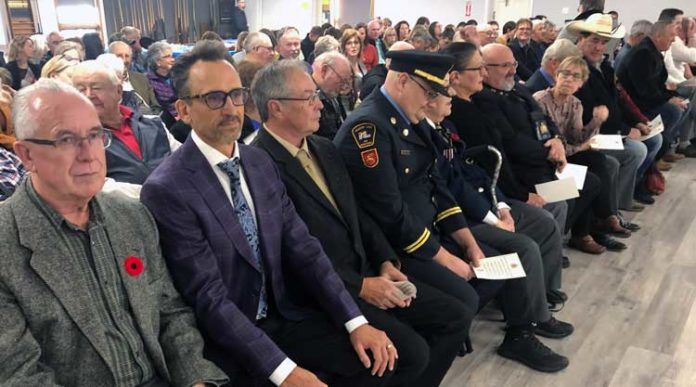 Forty residents of Meadow Lake and other parts of Saskatchewan’s Northwest were recently honoured for their contributions to Canada, Saskatchewan, and to their community.

“I’d like to welcome all of you to this investiture ceremony for the Queen Elizabeth II Platinum Jubilee Medal – thank you for joining us to help celebrate her late Majesty’s Platinum Jubilee and to recognize some exceptional Saskatchewan people,” Lemaigre said. “Today we are gathered to pay tribute to those who have given of their time and talents and service to their communities, our province and our country.”

The Queen Elizabeth II Platinum Jubilee Medal was created to celebrate the 70th anniversary of Queen Elizabeth II’s accession to the throne, which began Feb. 6 of this year. The medal is a tangible way for the province of Saskatchewan to honour Her Majesty for her service to Canada. A total of 7,000 medals will be awarded at ceremonies held throughout the province during the Platinum Jubilee year. Her Majesty The Queen approved the design of the medal in May 2022.

“While her passing on Sept. 8 makes our celebration bittersweet, it also makes the honour particularly special as we remember the spirit of duty which she served so selflessly,” Lemaigre continued. “Her late Majesty expressed her wish Jubilee events be an occasion for enjoying a sense of togetherness and optimism about the future which makes today the perfect opportunity to celebrate the achievements of people who make our community better. Today’s medal recipients lead rather than wait to be led. They tackle challenges head on, they see problems as opportunities instead of obstacles. Congratulations to everyone receiving this special distinction.”

“I want to welcome recipients – thank you so much for making time today, and thank you so much for all you do everyday – it is beyond appreciated by the Government of Saskatchewan which we have the honour of representing, and it is a great honour for Jim and I to be here with you today to share this special occasion and to celebrate the leadership you show in so many ways,” Harrison remarked. “I want to also acknowledge your family and friends who are here with us today. None of us serve alone, none of us are able to lead alone. It really is an effort of family, friends and community, and it is great to be able to gather today as a community to recognize all of you.”

The medal recipients were nominated by Harrison himself.

“And I wish I could have nominated 100 more,” he said. “Thank you so much. This is a wonderful group and this award is hugely deserved on behalf of each of you.”

The Queen Elizabeth II Platinum Jubilee Medal is a circular medal, 32 millimetres across, struck in copper and plated with nickel, and suspended from a ribbon using a new arrangement of the blue, red and white colours found on the other four medals issued during Her Majesty’s reign in 1953, 1977, 2002 and 2012. The blue represents Canada’s three seas, with the red and white being the national colours of Canada as taken from the national flag and Royal Arms of Canada. The white is also a representation of platinum, and the medal commemorates the Platinum Jubilee.

The front of the medal features the crowned effigy of Queen Elizabeth II with her Canadian style and title. The back bears the Saskatchewan shield of arms with the Queen’s royal cypher and dates of the reign at the top, separated by a pair of western red lilies (the provincial flower), and the phrase “Viva at Regina” (Long live The Queen) at the base. Recipients also received a certificate.