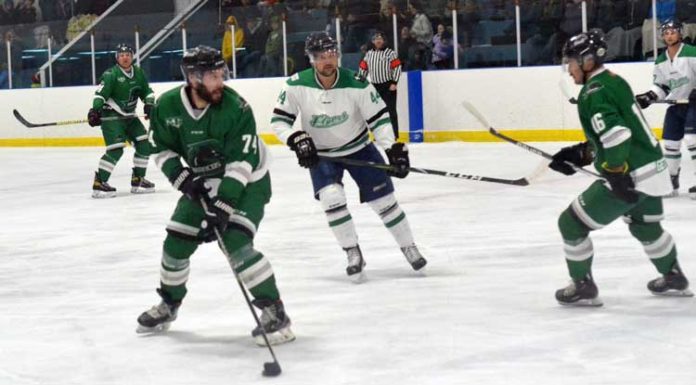 It wasn’t the result they were hoping for to kick off the 2022-23 season, but the Meadow Lake Sr. Broncos are geared up for the exciting year of hockey that lies ahead.

Originally scheduled to kick off the 2022-23 campaign with an away game Friday (Oct. 28) at Onion Lake, the team’s season opener corresponded with its home opener Saturday evening (Oct. 29) when the Broncos squared off against the Lashburn Flyers at PineRidge Ford Place on Flying Dust First Nation.

“Friday’s game was cancelled,” explained Broncos head coach Winston Morin. “Onion Lake didn’t have its team registered yet for insurance purposes, so the game had to be postponed.”

Saturday’s game against Lashburn, meanwhile, resulted in a 6-3 loss for Meadow Lake.

“We played well in spurts early on, but a little bit of rust and a lack of conditioning got us in the end,” Morin said. “We ran into some penalty trouble too, allowing two power play goals. It’s a learning curve at the start of the season as we work to get everybody up to speed on everything.”

Scoring for Meadow Lake in Saturday’s game were Logan Pethick who netted two and Shane Hounsell with one.

“As we get more of the veterans back from work commitments, things should improve,” Morin continued. “But, the young fellows show a lot of potential. They’re just not up to speed on team systems and whatnot. They had a good showing and they’ll be alright.”

“He had a strong game, and actually held us in there pretty good,” he added. “We also have a few new players on the ice this season including Beaudre LaRocque who is a local boy, Aidan Forseille who will be alright too and, on the back end, we have Carter Halter who will also help us on the road. We also had Jerome Norman – an affiliated player who still plays Midget hockey but, who we pulled up – and he did very well.”

Combined with team veterans, Morin added, the new players will help round out the team going forward.

“A lot of the veterans haven’t seen practice yet because it’s a busy time for everybody,” Morin noted.

As for the hometown crowd, while it’s always great to have the fans’ support, Morin believes the crowds will also improve as the season continues.

“It wasn’t a real big turnout, but the support is always great from our hometown fans – we can’t complain on that front,” he said. “There wasn’t much advertising for the first game, so I don’t know how many people knew about it. Hopefully things will be bigger and better going forward.”

Next up, the Broncos are scheduled to host Onion Lake this Friday (Nov. 4) at 8:30 p.m. before hitting the road Saturday (Nov. 5) for an afternoon rematch against Lashburn.

“We’re hoping to get better with every game,” Morin said. “It’s going to be a tough league because everybody is excited to play hockey again. We have a little catching up to do practice-wise, but we should be OK.”