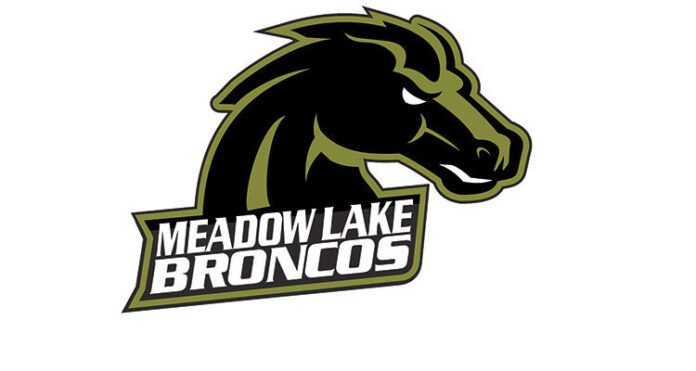 The Meadow Lake Senior Broncos continue a seesaw battle when it comes to achieving success in the SaskAlta Hockey League this season.

The Broncos split their games this past weekend, losing to the undefeated Wainwright Rustlers, but coming out on top against the Kitscoty Monarchs.

“Friday night (Dec. 9) we were in Wainwright, losing 4-2 with an empty netter,” explained Broncos head coach Winston Morin. “Our goalie, Jared Lafond, held us in there as best he could. He played a heck of a game. The Rustlers are undefeated, so I would say we had a pretty good showing.”

What hurt his team not, Morin added, is the slow start the Broncos had early in the game.

“We got into more of a groove for the second and third periods, but you can’t give up a whole period to those guys – you need to play the full 60 minutes as always,” Morin said.

“All-in-all, it was a good game,” Morin said. “We were short defensive players, however, so Ray Ross went back and played defence for us. Everybody put in a strong effort, and we really did match up to Wainwright. If we play them again when we’re at full strength, I believe we’ll really give them a run for their money.”

The following night in Kitscoty, the Broncos emerged victorious by a score of 5-4 in overtime.

“We had another poor start, but were able to come back,” Morin stated.

Unlike the undefeated Rustlers, however, Kitscoty is at the opposite end of the spectrum, having lost all of their games so far this season.

“We gave them a little belief they were in the game, and they certainly proved they belong to be in the league,” Morin said.

Scoring for Meadow Lake in Saturday’s game were McIntyre with the hat trick, as well as single markers by Ross and Logan Pethick. McIntyre scored the game-winning overtime goal.

“Matt Graff was in net that night, and got his first win – that’s a plus moving forward,” Morin noted. “And, the kids really played well in that one. A number of our new players did very, very well.”

This coming weekend, the Broncos will be back at PineRidge Ford Place on Flying Dust First Nation when they host the Hillmond Hitmen Saturday night (Dec.17). The puck drops at 8 p.m. The last time these two teams met, the Hitmen defeated the Broncos 6-3.

“Again, it was the same thing – we gave them the first period and they were able to get up 3-0 on us,” Morin said. “If we can fix the slow starts, we’ll be better off for it.”

Saturday night, the Broncos will also host their annual Christmas Cabaret event at the Meadow Lake Civic Centre. Morin said this is always a fun event, but also a very important one for the team.

“It doubles as our main fundraiser,” he said. “Hopefully it’s a big hit once again.”