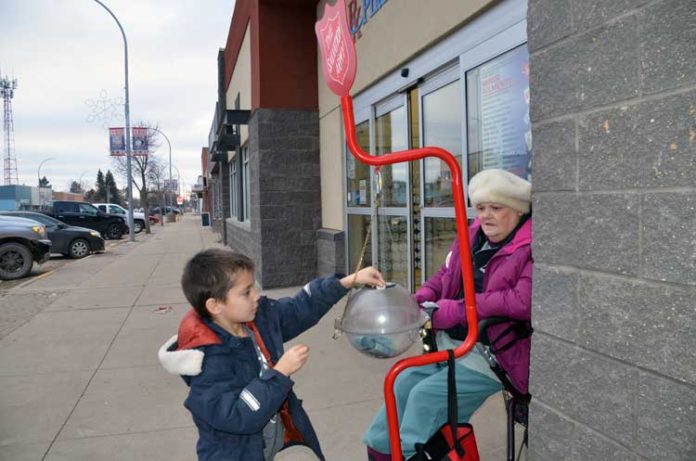 “God has given us a mandate to care for those who are in genuine need, not only by giving material assistance, but by sharing the gift of His unconditional love.”

These are the words of Maj. Karen Eason who recently returned to her duties with The Salvation Army in Meadow Lake, an organization that plays an important role in the community, especially during the Christmas season.

“Capt. Glenna Cryderman (who had been heading up The Salvation Army in Meadow Lake in recent years) was moved to another location this past year and, because our officer numbers are so low, they were not able to send in a new officer,” Eason explained. “I have come out of retirement to fill in on a very casual basis to keep things going as much as possible until they are able to bring in someone new. Maj. Peter (Eason) and I are also volunteering our time to do Sunday services and our by monthly Bible study and prayer time.”

As for the lead-up to Christmas, The Salvation Army recently began its annual Kettle Campaign. The public can provide a donation outside Madill’s Drugs Thursdays and Fridays, as well as some Saturday afternoons from 1 to 5 p.m. and Extra Foods on Saturdays from 1 to 4 p.m.

“There are various counter kettles at some businesses in the city  as well,” Eason noted. “Our Christmas letter appeal envelopes have been sent out as well, and we are doing our hampers as usual this year. Posters are in various areas in the city explaining the times and days to call in for interviews.”

The Salvation Army has been in the Meadow Lake community and surrounding area since 1936.

“The community has been very, very supportive of The Salvation Army over all these years,” Eason added. “Christmas is our especially big time of the year where we – and those who support us – can give back to the community. Though our hamper program has always been the biggest and heaviest time for us during the year, it has had to change somewhat in recent times.”

In the past, The Salvation Army would collect donations of food and fill boxes with this food to give to those who were having a particularly hard time at Christmas. Many volunteers would come out to help pack the boxes.

“However, we’ve had to change things in the last few years, as it has become too much,” Eason said. “We have since gone to a voucher system where people can go and get their own food and items they prefer to eat. The vouchers provide enough to supply them with a good Christmas meal, and have a bit extra as well. These vouchers will also provide the means to provide a toy to each child in the family.”

Eason said, as The Salvation Army has now moved to a voucher system, food and toy donations are no longer required.

“But, that does not mean the community’s support is not needed,” she said. “We definitely need donations to help pay for these items, and each donation not only helps us at Christmastime, but throughout the year.”

Eason also reiterated how, throughout the years, the community has supported The Salvation Army through various means such as the Kettle Campaign, Christmas letter appeal and numerous other fundraising initiatives such as the CJNS Empty Stocking Radio Day and the Battle of the Badges hockey game.

“We have also had many people of all ages volunteering in other different ways, especially with our kettles,” she said. “We still have a faithful army of volunteers who stand outside in our freezing temperatures at our Madill’s location. This is one of the few outside kettles left across the country – at least where the temperatures and windchill can reach -40C.”

She also stressed the importance of providing for others.

“God sent us Jesus to show His love, and with receiving His love within us, we want others to experience this greatest gift of faith, hope and love,” she said. “We at The Salvation Army strive to always share Jesus’ love at this blessed time of year in word and deed, but also throughout the entire year. We pray all will remember Jesus is the reason for the season, and that we will all experience His love, joy and peace in our hearts every day of the year. God bless you each one.”