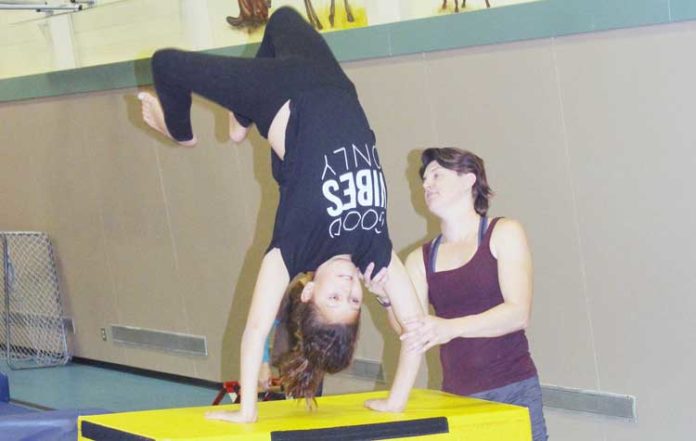 After being grounded for a few years because of the COVID-19 pandemic, the youth gymnastics program in Meadow Lake is ready to fly high once again.

The Meadow Lake Gymnastics Club will return in the New Year with a new face leading the charge. Kitena Hill will serve as the club’s new head coach when the excitement returns to the Lakeview Elementary School gymnasium next month.

“Growing up, I was a gymnast for about 13 years,” Hill explained. “I’ve been involved with the sport as a gymnast, as a coach and also as a judge. When I was looking for opportunities for things to do when potentially moving to Meadow Lake and settling in to a position here, I discovered the local gymnastics club was without a coach.”

Hill reached out to former head coach Amber Stang, learned more about the club and decided, since there was a need for gymnastics in the community, she would take on the challenge.

“From there, we had a parent meeting, I put the word out on Facebook, and my phone exploded,” Hill said. “There was so much interest. About 25 people attended the meeting, we have a board of about 12 volunteers ready to help with everything going forward and, for our three categories – active start, recreation and competitive – we have a manager. It’s a heavily involved parent board, which is fantastic because – when the support is there – it makes it that much easier to be involved with something like this.”

A registration night for the revived club took place yesterday (Dec. 7), but those interested in signing up their children for gymnastics can still do so. Information is available at the Meadow Lake Gymnastics Club Facebook page or by emailing meadowlakegymnastics@gmail.com.
This is the first time gymnastics has been offered in Meadow Lake since 2020.

“When COVID hit, restrictions were to the point where activities like this could not take place,” Hill said. “And, because it’s a setup and take-down club based at one of the schools, as restrictions lifted, the school was still not able to rent out its facility. Now, as things have started to fully open back up, the former coach has decided to spend more time at home with her family and is not going to be running the club at that point. That’s when I said, if there is interest and enough people, let’s see if we can make it a go.”

Hill said, when it comes to gymnastics, it’s important for young children to learn the associated movement patterns.

“And, just being part of a club or organized sport has its benefits as well,” she added. “There’s the social aspect, the chance to learn new skills and more. It’s nice to get their bodies moving, but there are so many other benefits as well.”

In closing, Hill shared her excitement for the start of the new gymnastics season.

“I really didn’t think it would take off as well as it has,” she said. “The interest has blown me away. I am really looking forward to being involved in gymnastics again, and to be offering it to the community.”