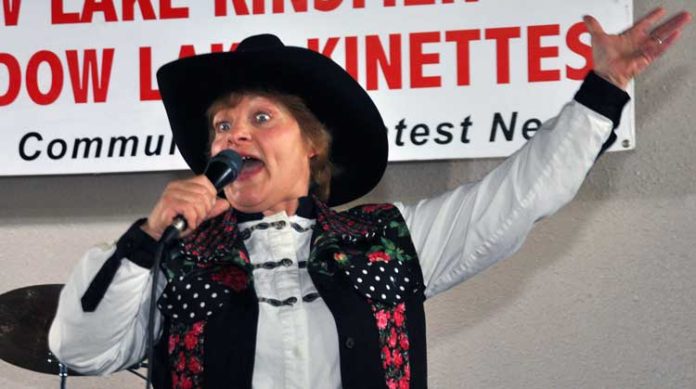 One of the most popular gifts under the tree for many Meadow Lake and area folks this Christmas will be sure to cause a ‘calamity’.

Critters an’ Calamities is the title of the new book written by Meadow Lake’s very own cowboy poet Linda Nadon, and it’s arrived just in time for the holidays.

“I held a book launch last Thursday (Dec. 15) at the Meadow Lake Library,” Nadon explained. “Tawn (Marshall) at the library pulled it together for me. I wasn’t sure if the book was going to make it in time for Christmas, so it was difficult to schedule something too far in advance. In the end, it was a nice little turnout.”

During the book launch, Nadon gave a one-hour performance of some of the poems which appear in Critters an’ Calamities. She also signed copies of the book for the fans in attendance.

“A few people bought copies for Christmas gifts – it was a lot of fun,” Nadon said.

“The first book was quite small, but this new one is quite a nice one,” Nadon continued. “In addition to the poetry, it includes photos from around the ranch. I like to take pictures. I wouldn’t go so far as to say I’m a photographer, but, if I see an interesting shot, I like to take it… It’s a little different.”

Nadon went on to say she had been working on the book for quite some time, putting a concentrated effort into it in the early part of the year before submitting it for publication in March.

“It took a little bit of time, but I now have the book in my hands and I am happy,” she said.

Copies of Critters an’ Calamities can be purchased at Madill’s Drugs on Centre Street or through Nadon directly by contacting her at 306-236-8759 or via email at l.lnadon@hotmail.com.

Nadon started writing in the 1990s.

“At the time, however, I didn’t know it was cowboy poetry,” she said. “In 2012, I attended the National Cowboy Poetry Gathering in Elko, Nevada. That’s when I realized I wasn’t the only one who does this, and it even has a name.”

From there, Nadon began to write more poetry and to attend various events and competitions. In 2015, she released a CD titled North of 54 and has continued to take part in various events off and on in the years since.