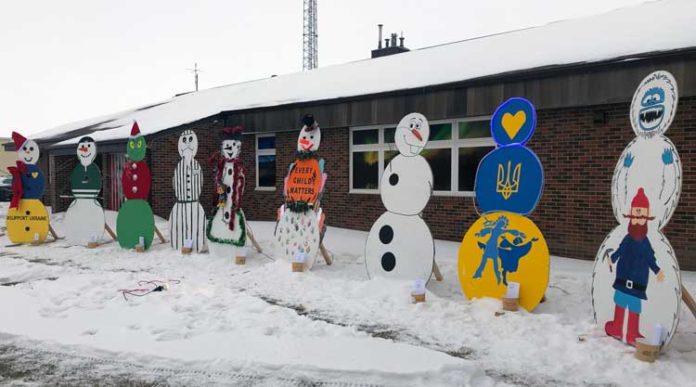 It wasn’t the usual police lineup.

A series of “snowmen” – or, in this case, decorated wooden cutouts designed to resemble snowmen – were erected in front of the Meadow Lake RCMP detachment last week as part of an annual fundraiser for The Salvation Army. Visitors to the detachment Dec. 14 could show their support for The Salvation Army’s Empty Stocking Fund by partaking in the on-site barbecue lunch or by simply voting for their favourite snowman by providing a cash donation.

“Our detachment services assistant (DSA) Vivian Thickett has been organizing these fundraisers since around 2016 and they’ve kind of evolved over the years to where we now include our DSAs, guards and matrons, our youth advisory committee and more,” explained Sgt. Dean Kabaroff, acting detachment commander in Meadow Lake. “We try to get everyone involved. They decorate a snowman, while the day itself (in this case Wednesday, Dec. 14) we put on an event to raise money for The Salvation Army. The detachment has a lot of fun doing it as well.”

There is also an element of friendly competition involved, with participants eager to see which snowman receives the most donations. This year, the top earner was the snowman resembling the Grinch designed by the RCMP youth advisory committee.

“In the end, we raised a little more than $1,800 in total,” Kabaroff said. “We really appreciate everyone stopping by, purchasing burgers and donating on their own. There were a number of people and businesses that went above and beyond with donations.”

In addition to the desire to support The Salvation Army and its efforts to ensure people in need have a happy holiday this Christmas, Kabaroff said events such as the one held last week go a long way with strengthening the RCMP’s ties to the community at large.

“It’s important to be involved in and to give back to the community,” he said. “We all enjoy community involvement, which can be tough at times because of our scheduling. All funds raised, however, stay in Meadow Lake and area – including Flying Dust First Nation and Waterhen Lake First Nation – and it’s important to show us in a different light, being proactive and engaged in the communities we serve.”

In closing, Kabaroff reiterated the effort made by Thickett to put an event such as the snowmen fundraiser together.

“This was her show and she did another outstanding job,” he said. “Without her and her organizational skills, this wouldn’t have happened. We all enjoyed being part of it and we really appreciate the community’s efforts to give back to their own community. Hopefully this can help some unfortunate families have a better Christmas.”