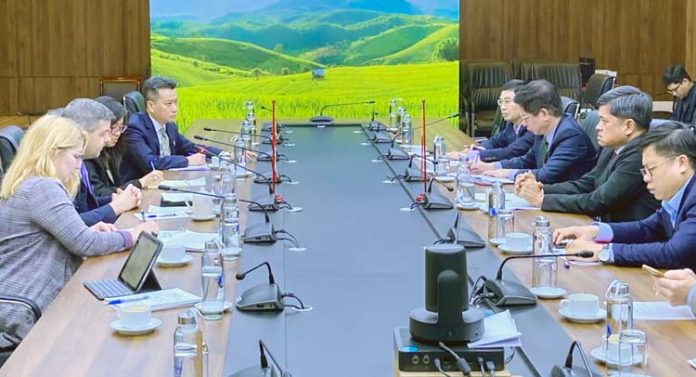 While most people are partaking in the pre-Christmas traditions such as tree decorating and last-minute shopping, Meadow Lake MLA Jeremy Harrison has been on an important mission… in Vietnam.

Harrison departed for Vietnam Dec. 8 to discuss trade and additional economic partnerships in his capacity as Saskatchewan’s trade and export development minister.

“Saskatchewan has the food, fuel and fertilizer our growing world needs,” Harrison told Northern Pride. “This trip will be imperative to showcase the benefits of our agriculture commodities, natural resources, forestry sector and innovation. This trip will also enhance access in the Asia-Pacific region, which will help to sell more of our agricultural products, such as those produced right here in Meadow Lake.”

Harrison went on to note the province’s goal is to strengthen ties with Vietnam.

“An example of Saskatchewan’s commitment to strengthening those ties is our recently opened trade and investment office in Ho Chi Minh City,” he said. “As we move forward, we are always seeking to diversify our exports into markets outside of China.”

Canada and Vietnam are both part of the Comprehensive and Progressive Agreement for Trans-Pacific Partnership, a free trade agreement between nine countries in the Asia-Pacific region. This free trade agreement eliminates tariffs and reduces trade barriers, meaning decreased costs of the things we make together, allowing participants to be more competitive on the world stage.

The current trade mission emphasizes how Saskatchewan-sourced agricultural products and potash can enhance food security. The province is already Vietnam’s largest supplier of dry peas, making up 47 per cent of all imports of the product to the nation.

“The reality is we as the Province of Saskatchewan have to take care of our own interests around the world because the Trudeau Government could care less,” Harrison remarked. “In meetings with the Vietnamese minister of agriculture and minister of trade and industry, it became clear the Vietnamese believed the biggest bilateral trade issue between Canada and Vietnam were exports of Atlantic Canadian blueberries. That’s what the Trudeau Government has been pushing for the past three years because of the small industry in P.E.I.  Meanwhile, our wheat exports – almost all from Saskatchewan – have gone from nearly 200M per year to zero, and all because the Government of Canada won’t engage on a non-tariff phytosanitary issue around thistle content the Vietnamese are anxious to resolve. Instead, Trudeau has made a tiny eastern Canadian industry his top priority. The Vietnamese now source almost all of their wheat from Russia.  It should come from Canada. We agreed with the Vietnamese government we will work through our Saskatchewan office in Vietnam to resolve this issue now as a top priority.”

The province opened a trade and investment office in Vietnam in February of this year, which is already increasing provincial exports. Year-to-date exports from Saskatchewan to Vietnam are up by 50 per cent in 2022, to $91.7 million. Much of that increase is being driven by increased exports of potash, wood pulp, canola oil, lentils and weighing machinery.

“Saskatchewan has the resources and technology our growing world needs,” Harrison said.

The Saskatchewan’s delegation is scheduled to return to Canada tomorrow (Dec. 16).