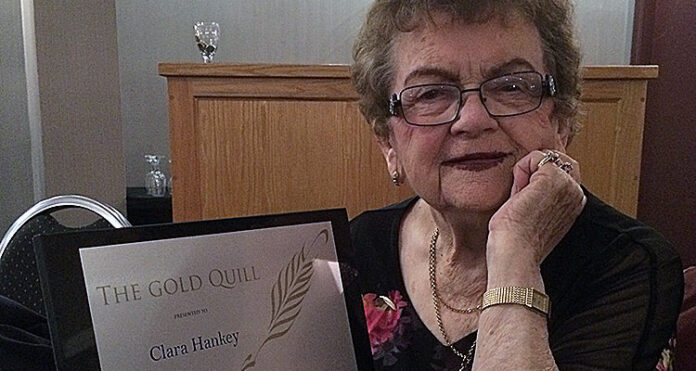 The ability to do what you love is reward enough.

That’s how long-time Goodsoil resident Clara Hankey feels, but, in spite of this, Hankey was still recognized recently for her half-century of contributions made to Canada’s newspaper industry. Hankey, who formerly wrote for the Meadow Lake Progress and today still submits a regular column to the Beaver River Banner, was in attendance for this past weekend’s Saskatchewan Weekly Newspaper Association (SWNA) convention in Saskatoon where she was presented with the Golden Quill Award on behalf of the Canadian Community Newspapers Association (CCNA). The Golden Quill is presented to an individual who has been actively engaged or has made a substantial contribution to the newspaper industry for 50 years or more.

“I’m rather humbled,” Hankey noted with regard to the honour. “I simply write because I love to write.”

Born in Tuzina, Czechoslovakia to German-Hungarians Joseph and Klara Greschner, Hankey and her family came to Canada when she was two years old. They resided in west-central Saskatchewan before moving to the area later known as Goodsoil in 1930. In 1948, she married Francis Hankey, a Second World War veteran, and together they raised six children.

“I started writing in 1966 and my first report was on the grand opening of our local hospital here in Goodsoil,” Hankey said. “After that, I thought to myself, ‘why not keep writing?’”

Goodsoil, Hankey added, was settled by people who were mostly in their 30s at the time. So, by the time she started writing, many were getting older and could not attend community events as much as they would have in the past. Reporting on the goings on in Goodsoil and area, she said, was a way for her to help these individuals to keep on top of the local news and feel as though they were still part of the community as a whole.

“I just decided to write another column, and another and another, and it just kept going from there,” Hankey said.

In addition to her newspaper work, Hankey also served as postmaster of the Goodsoil post office for 36 years starting in 1960. While working for the Meadow Lake Progress, she also had an opportunity to contribute to  special edition of The Weyburn Review. Her task was to write about what it was like to be a correspondent from a small community. Her story and photo ended up being the feature article in the edition.

These days, Hankey, who turns 90 years old this Monday (May 2), has not been able to take in as many community events as she once did. However, she still finds stories to write about while reminiscing about events from years past. Her readers enjoy remembering how things were “back in the day.”

“I definitely plan to keep writing,” she said. “I enjoy it more now than I did before because, at my age, I’m not afraid to say whatever it is I want. My imagination is still very good and my memory is excellent.”

As for receiving the Golden Quill, Hankey said it was a wonderful experience.