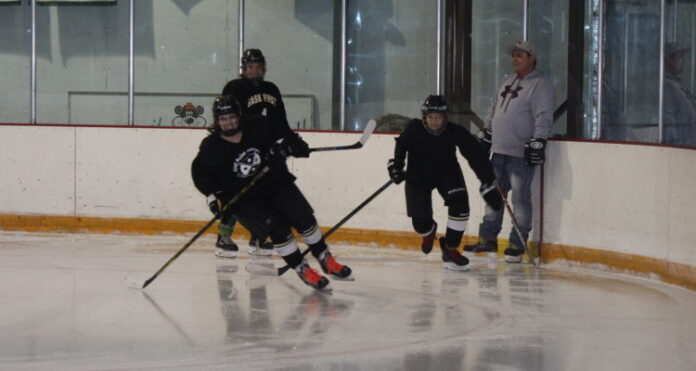 On the heels of a championship winning season, the Meadow Lake Female Midget AA Stampeders are increasing the intensity.

It’s the Stamps first season ever playing as a AA team, having most recently swept the North Sask Female Hockey League in the Midget A division. The squad also consists of a largely out of town roster with many former players either graduating and leaving in June or gone on to other teams.

“These girls are fortunate to have AA hockey in Meadow Lake,” said manager Treena Neufeld. “We just started a girls team not long ago and got it up and running, and to have AA calibre in Meadow Lake, is an awesome opportunity for them.”

Considering the squad only has five returning players, Neufeld stated it was a struggle to recruit new members to the team. While a handful are from Meadow Lake and Flying Dust First Nation, the remainder of players come from Loon Lake, Onion Lake Cree Nation and the surrounding area. With so many changes taking place, Neufeld doesn’t expect a strong start to the season.

“It’s a different team and nobody knows each other’s style of play,” she remarked. “That will come and, once they get to know their linemates, they will do a lot better. Right now, we are a new team and we don’t know how all the girls will play and what they’re capable of.”

So far, the Stamps have played three regular games and lost them all. Most recently, the squad hosted the Battleford Sharks Oct. 30, but were defeated by a 4-2 score. In that game, goals were scored by Kendra Leer and Amy Cantre. Next, the Stamps travel to North Battleford where they have a chance to strike back at the Sharks.

Meanwhile, Onion Lake Cree Nation parent Roger Burns – who drives two hours every Monday and Wednesday for practice with his daughter, Kirsten, and three other girls – said the team will win, but it will take time.

Burns went on to say the girls from Onion Lake formerly played on a Midget B team and joining the Stamps is a big deal for them. He added, his daughter is learning a lot and he’s excited to see what the season has in store.

“She loves it,” Burns said about his daughter’s experience on the squad. “She’s never experienced such a conditioned program like this where it’s so intense and focused on winning. She’s building skills every time she comes here.”