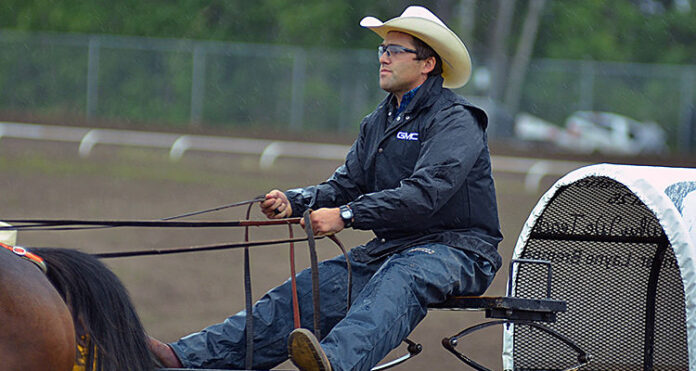 What a difference a year makes.

After experiencing a decline in 2016 as a result of an economic downturn, fortunes have rebounded for the Calgary Stampede GMC Rangeland Derby chuckwagon canvas auction which, this year, achieved its ninth highest total in its history bringing in more than $2.4 million.

“I was very happy with the sale,” remarked Meadow Lake area chuckwagon driver Gary Gorst who competes in the World Professional Chuckwagon Association (WPCA). “Calgary’s total is up a bit this year and any time it goes up is a bonus. With the economy the way it’s been, it was a little scary going into this year’s auction, but everything worked out OK.”

The next chuckwagon auction will be on Thursday, April 6 for the bulk of the WPCA Pro Tour. While Rapid View driver Layne Bremner will be looking to secure funds at that event, he won’t be around for the whole season.

Bremner began his thoroughbred chuckwagon racing career in 2009 with the CPCA before moving to the WPCA last season. In 2011 he was presented with the Orville Strandquist Award for being the top rookie driver in Calgary, and last year finished 31st overall in the WPCA standings. A nephew of Gary Gorst and cousin to Dustin and Logan Gorst, Bremner and his wife, Bobbi, have two sons, Carter and Cruze.

“I’m going to miss it because wagon racing has been a part of my family for a long time,” he said. “But, I’m planning to go to school this fall to become an electrician, so I will be keeping myself busy.”

Bremner said he will miss the camaraderie experienced on the racing circuit most of all.

“That’s the biggest thing, as well as just being around the horses,” he said. “If the sport is still going, I may decide to make a comeback one day, but it’s hard to say.”