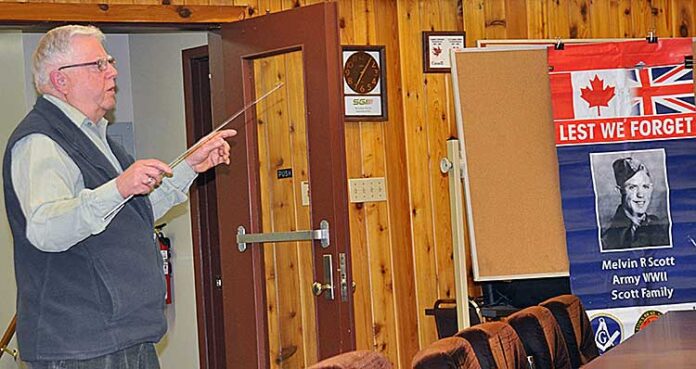 Meadow Lake is ready to salute its veterans.

Although an official decision won’t be made until council’s next meeting March 13, feelings of both eagerness and optimism were shared around the table in response to a presentation made during the group’s Feb. 27 gathering.

Speaking on behalf of a joint committee between Royal Canadian Legion Branch 76 and the Meadow Lake Masonic Lodge, George Wood informed council of plans to hang banners depicting local Armed Forces and RCMP veterans along Centre Street and Veteran’s Way. It’s similar to an endeavour undertaken in St. George, ON.

“The Masonic Lodge, in conjunction with the Legion and the Town of St. George, came together to salute veterans and produce these banners, which they proudly display in their town,” he explained.

Wood went on to say, by doing something similar in Meadow Lake, it would put the city on the map and also provide a decorative addition to the downtown core. It would also be nice, he said, for it to happen in conjunction with Canada’s 150th birthday and the 100th anniversary of the Battle of Vimy Ridge.

“We have gone outside the city and secured private individuals who are prepared to secure the banners to the poles,” Wood said. “We’ve identified approximately 60 locations where we’d like to have these displayed. They’re also double-sided, so they can be seen from either direction.”

The committee has agreed to be responsible for any damage.

“All we need from the city is simply an endorsement and permission to hang the banners on the light standards,” Wood said. “The banners would be hung for a minimum of three months or longer (each year).”

Meanwhile, councillor Glen Winkler asked how much each banner would cost to which Wood replied $200-$250 including the necessary brackets. He also said the committee would cover initial costs and grants may also be available.

“Is there anyone else in Saskatchewan doing this right now?” asked councillor Curtis Paylor.

When Wood said there is not, Paylor stressed it’s probably a good idea Meadow Lake be the first.