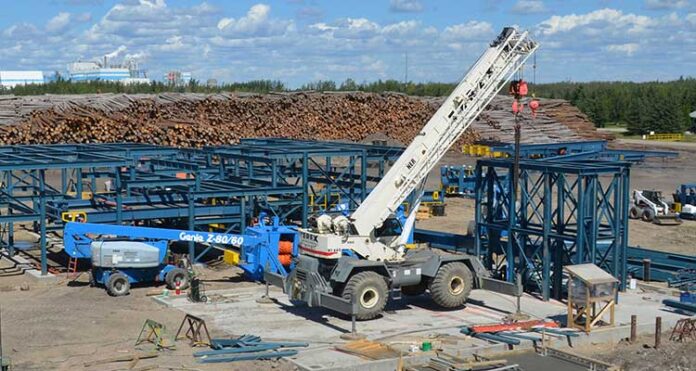 NorSask Forest Products is beginning to bloom once again, but not without the loss of a few branches here and there.

According to Al Balisky, president of Meadow Lake Tribal Council (MLTC) Industrial Investments – the company that oversees NorSask – not all workers who were laid off following a January fire that slowed operations at the mill will be back on the job once the current rebuild is completed later this year.

“We’ve lost half our workforce during this time,” Balisky said. “We’re operating at about 35-40 per cent capacity and we’ve had to reduce our workforce to a one-shift basis, so we’re down by roughly 50 per cent. We’ve worked closely with our employees, but, no question, it’s been difficult. We can’t wait to get ourselves back up and running and as many folks back to work as possible, but we are going to see a reduction in the workforce because of the new technology being introduced into the mill. These technological advancements mean there will be fewer folks we’ll be bringing back.”

“From January to July, a tremendous amount of effort has gone into the rebuild,” he continued. “We’ve secured a full turnkey operator to complete all the work – from engineering right through to completion. The front end of the mill is being completely redesigned and we’ll be looking at a new infeed area, two new de-barkers and a new slasher deck and conveyance and bin system leading up to our existing canters.”

While much of the new equipment is already onsite, much of the effort thus far has been focused on foundation work.

“It’s been one of the wetter springs Meadow Lake has ever seen, though, so we’ve been challenged on that front,” Balisky noted. “Still, the crew remains on schedule for a start up in early October.”

Meanwhile, another project NorSask was looking to be a part of has since been derailed. Balisky said the mill will no longer be moving forward with previous efforts to use wood pellets as a power source for northern communities.

“NorSask did build a small pellet plant, but, unfortunately, we’ve had some issues with design work and it’s such a small facility, it hasn’t worked out so well,” he said. “So, it isn’t happening.”

Still, Balisky is optimistic when it comes to the future of a biomass power plant in Meadow Lake.

“The actual pellet capacity we developed we’re not going to pursue, but we are enthused about the potential for a power plant in Meadow Lake,” he stated. “It would take the NorSask burner, the Meadow Lake Mechanical Pulp burner and any bit of residue the OSB plant would have, as well as the Carrier sawmill in Big River and put it into a power plant that would burn biomass. We’re hopeful we can get that over the finish line. A lot of investment has gone into it and we’re hoping the provincial government and SaskPower can help us realize that goal.”