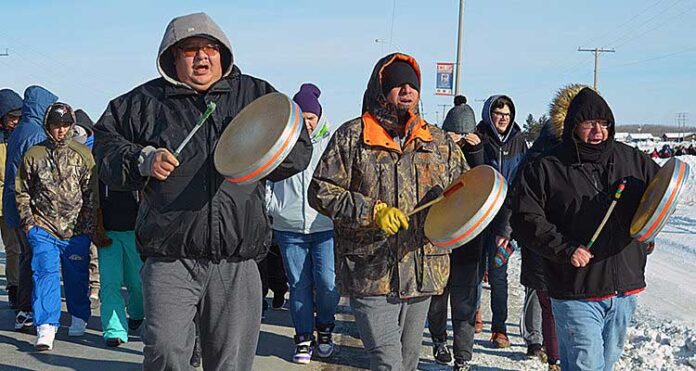 The communities of Meadow Lake and Flying Dust First Nation are not about to let anger and hatred tear apart what has become a respected, strong and highly valued relationship.

After Biggar area farmer Gerald Stanley was acquitted Friday (Feb. 9) of second-degree murder in the 2016 shooting death of Colten Boushie – a 22-year-old indigenous man from Red Pheasant First Nation – there has been much divide, primarily via social media, amongst indigenous and non-indigenous people alike. The disconnect has been felt throughout Saskatchewan and beyond, and the local area has been no exception. That’s why the two communities chose to organize a special unity walk Monday afternoon, a showing of solidarity that attracted hundreds, began at the Flying Dust band office and led into Meadow Lake via Highway 55.

“I don’t go on Facebook much, but there is a lot of negative stuff on there about what’s been going on,” stated Flying Dust elder Jim Norman. “It seems it wants to drive a wedge between us and for the wrong reasons. I haven’t experienced racism much in my life, but I have seen it and it is ugly.”

Norman went on to say it’s important for everyone to guard their hearts against that sort of negativity.

“It’s something we have to take a stand against,” he added. “God loves us all, every single one of us. We’re all one in his sight. We can’t be judging others over the colour of their skin… it’s foolishness… We can have a good life here in Meadow Lake and Flying Dust. We just need to respect each other.”

This was echoed by Flying Dust band councillor Richard Derocher.

According to Flying Dust chief Jeremy Norman, the reason his community wanted to be a part of organizing an event like the walk was to show the community, to show Saskatchewan and to show Canada, “it’s not about conquer and divide.”

“It’s not us against them,” the chief added. “We’re so much stronger when we work together. Our communities are so close. I grew up in this town. I went to school – all my years – in this town. My minor hockey, my senior hockey, everything I have done has been with people from Meadow Lake. Growing up I didn’t face a lot of racism, I didn’t have to deal with that in my own community. It was outside I dealt with that. The purpose of our walk today is to show everybody we’re bigger in this community. We’ve overcome so much. We’ve partnered on education, we’ve partnered on recreation facilities. We didn’t want an event to gain fire in our community. I’m touched by everybody here. It shows we can be one. We are hurting and some people are angry, but that’s when other people step in and help you along. That’s what I see today. We are united and we are one.”

Representing the city at Monday’s walk was mayor Gary Vidal. He said, when planning the event with Flying Dust, it was apparent the community was experiencing real hurt and real pain.

“I don’t want to pretend or claim to understand because I don’t,” Vidal said. “To do that would be dishonest and would not be credible. But, I do want to acknowledge it and want to confirm we support you as good neighbours and as good friends… I truly hope today’s event is one small step toward demonstrating how important it is to focus on how we choose to act going forward.”