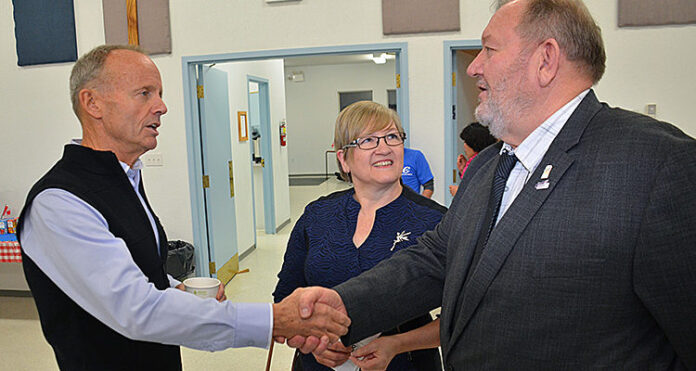 Desnethé-Missinippi-Churchill River is a winnable riding for the Conservative Party of Canada.

That was the message put forth by former Canadian Alliance leader Stockwell Day when he visited Meadow Lake Friday evening. Day was the special guest at a fundraising event put on by the riding’s Conservative Electoral District Association and held at the Catholic Church Hall.

Day went on to say the candidate race is now on with one potential local candidate already stepping forward.

“If you believe in good fiscal management, low debt, low taxes, if you believe in good agriculture policies, if you’re concerned about the competitive advantage the United States has now relative to Canada, please consider the policies this (and other) nominee(s) will be talking about,” he continued. “Mr. Trudeau believes in high debt, high taxes, but I believe that is quite harmful. The NDP has never pursued a particularly strong fiscal line, which again leads to increased taxes, governments having less money for social programs, business beginning to fade away. These things, I believe, are important to people in the West.”

The nominee Day spoke of is Prince Albert area resident Al Jurgens. He was also in attendance for Friday’s event where he made his plan to secure the nomination official.

“For the last 25 years I have been working in the riding in the forest industry,” Jurgens said. “Right now, I’m working in the education field in Buffalo Narrows. I’ve got to know the riding pretty well, so this is more of a good fit for me.”

Jurgens is currently the program head for the first-year of the integrated resource management program offered through Dumont Technical Institute.

“If chosen to be the local Conservative candidate, something I can bring to the role and that I’m fairly good at is I understand most of the people in the riding,” Jurgens added. “I’ve worked for First Nations people, I’ve worked with them and I’ve hired them as employees. I have a good understanding of them, and, down south, agriculture and forestry is my background.”

According to association president Merv Johnson, more names are likely to come forward before a local candidate is selected this spring. The next federal election is set for Oct. 21, 2019.