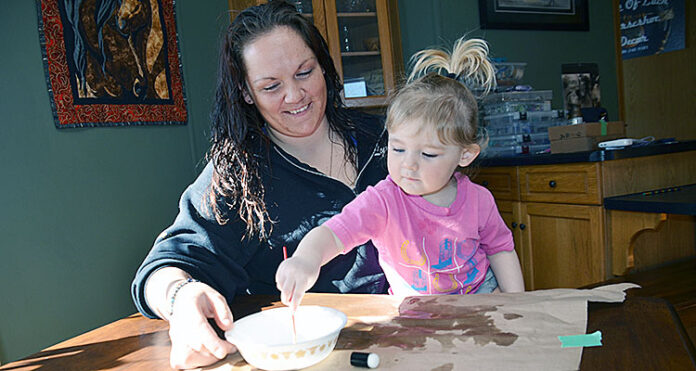 This is the message Meadow Lake area resident Lyndsey Rutz wants people suffering from postpartum depression (PPD) and postpartum anxiety to understand when seeking help from their family, their friends and, now, others who know exactly what it is they’re going through. Rutz is the founder of A Room of Our Own, a new, non-profit group that provides resources and support to PPD sufferers.

“A Room of Our Own is a support group for moms and dads dealing with postpartum depression and anxiety,” Rutz explained. “It’s been running for about a year-and-a-half now. I went through PPD myself and, initially, met a young lady who had also experienced it. She’s the one who got me back on track. After I began to heal, I insisted more people need to learn about this problem.”

A Room of Our Own, Rutz added, is a safe, secure, non-judgmental group.

“People are allowed to speak freely or not speak at all, but just know there are others out there who are going through this,” she continued. “PPD is one of those hush hush things. Nobody really speaks about it, it’s loaded with embarrassment and guilt, shame, everything. This group creates a safe place where people say, ‘hey, I totally get it. I’ve bee there.’”

Those who reach out to the group have access to counsellors, as well as what Rutz described as an abundant amount of information. That abundance of information is also expected to increase substantially thanks to a recent $1,500 donation from Tolko’s Meadow Lake OSB Division. Rutz’s husband, Greg, works at the Tolko site and, according to plant manager Trevor Brander, A Room of Our Own is an initiative his company can truly appreciate.

“Playing an active role in our community is important to us and seeing our employees and their families starting up new projects to help improve people’s lives in Meadow Lake is an easy endeavour to get behind,” Brander noted. “We are very proud to be able to help out with families in our community.”

A key part of the donation will help fund self-care days – a special day provided just for moms and dads to have a nice time to relax and get a guilt-free break Rutz said they deserve. These days are held every four to six weeks in addition to weekly group meetings held at various venues.

“This donation is going to make a huge impact in our efforts to help moms and dads realize it’s OK to seek help if they or their partner is struggling,” Rutz said. “Whether it’s a first baby or not, there is no shame to be had in having an illness you cannot explain or control.”
PPD is a type of mood disorder associated with childbirth, which can affect both sexes. Symptoms may include extreme sadness, low energy, anxiety, crying episodes, irritability, and changes in sleeping or eating patterns.

A Room of Our Own also brings in inspirational speakers, attends community events to promote PPD awareness and conducts mom-to-mom sessions. In the last year-and-a-half, Rutz also said A Room of Our Own has had numerous people seek out its services.

“I don’t know exactly how many there have been, but I do get quite a few random calls and texts,” she said. “There are many people affected by PPD. It’s a mental illness and no different than if you are physically hurt, so there shouldn’t be and shame, guilt or embarrassment with it. Unfortunately there is and many people are too scared to come forward because they think someone will get involved, make a judgement call and take their child away. But, it’s not your fault and it’s OK to ask for help. Nobody is going to call you a bad mom, a bad parent or a bad person. We understand.”