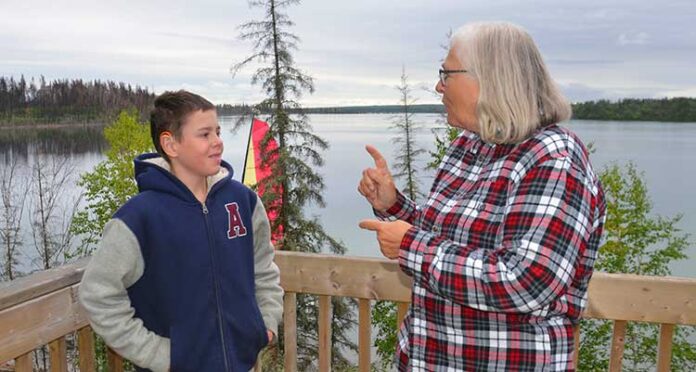 The word of God did not fall on deaf ears during a recent gathering at the north end of Jeannette Lake… or did it?

From Aug. 20-25, Camp Oshkidee in the Meadow Lake Provincial Park hosted a family camp for Saskatchewan Deaf and Hard of Hearing Services. With a focus on the teachings of Jesus Christ, the camp – a first for Oshkidee – proved popular amongst members of the deaf community.

“Our primary goal is to encourage families to learn about Jesus,” remarked Shelly Carver, past director of the camp. “However, our secondary purpose is to help parents improve communication with their children who may be deaf or hard of hearing.”

The camp, which has been held annually at different locations for close to 30 years, exposed participants to deaf culture, provided lessons in American sign language, featured programs geared toward children and learning, as well as traditional summer activities.

“It’s also been a chance for parents of deaf children to learn about what we call healthy deaf adults,” Carver continued. “Many of us are taxpayers, many of us own our own homes, many of us have a driver’s licence. But, a lot of parents, when they first learn their child has a hearing loss, become devastated or they grieve because they feel they’ve lost a healthy, normal child. When they meet deaf adults who are leading healthy, normal lives, it gives them a sense of hope. It helps them to focus on their child’s abilities rather than his or her disabilities.”

This year’s camp saw 67 people register including families from British Columbia, Alberta and Saskatchewan. In past years, participants have also come from Manitoba, Ontario and the U.S.

“A lot of the same people come back each year,” Carver said. “But, this year, we put a heavy focus on bringing in new families. We have three families this year that have come for the very first time… There’s all kinds of great things happening.”

Carver went on to say Camp Oshkidee was brought to the attention of camp organizers by Sonja and Ryan Van Ee of Saskatoon. They attended the deaf and hard of hearing camp for the first time last year when it was held in Glen Harbour, SK.

“This location is fabulous – I’ve already had people ask if we can come back here next year,” Carver noted.

Both Sonja and Ryan Van Ee attended Camp Oshkidee when they were children and felt it would be the ideal location for such an important endeavour.

“Our oldest son, Noah, was diagnosed as deaf at age two,” Sonja Van Ee said. “We really saw the value in American sign language, so we needed to become part of a deaf community. This camp was a great place to become involved and get to know some people who are fluent ASL users.”

“Oshkidee is all about building up families, and the deaf community is just that – it’s like one big happy family,” he said.

This was echoed by Alison Klassen, executive director at Camp Oshkidee.

“It been very exciting for us because, when the Van Ees approached us with the possibility of having the deaf and hard of hearing camp here, we just thought what a great opportunity,” Klassen said. “Then, as we met Shelly and some of the other committee members, we thought this is so perfectly in line with what we’re all about, with our mission to see families and individuals experience God and have an opportunity for a relationship with Jesus. The idea of it happening was very positive, but to actually see it happening has been very encouraging.”

Meanwhile, new to the deaf and hard of hearing camp this year was the Lennea family of Meadow Lake.

“My son, Dolan, inspired us to attend, as he is deaf with cochlear implants,” Kim Lennea explained. “I saw this as an opportunity to expose him to a deaf community as well as one with a Christian-based theme. Both of these are important to our family. It’s also close to home, which is a big plus, but I’m sure we would have travelled to attend this camp had it been held elsewhere.”

Lennea also said the experience at camp has encouraged her son immensely to speak sign language with others who can also speak it.

“It’s also been fun to be part of a deaf community, but also a community of believers in Christ Jesus,” she said. “As a family that believes in Jesus, it’s very important our son know there are others who sign and also believe in Jesus.”