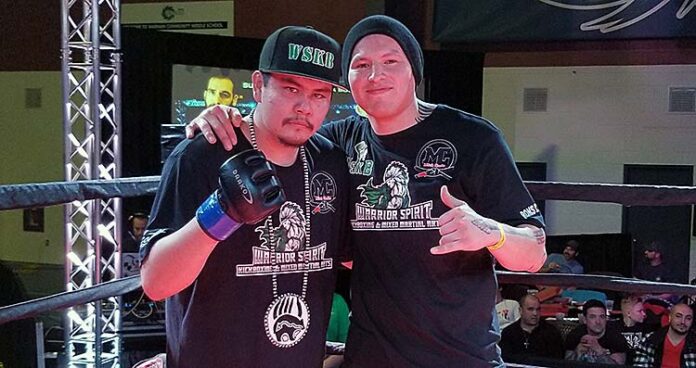 He may be new to Meadow Lake, but Chad Sutherland plans to make his name one people won’t soon forget.

Sutherland, who is originally from Duck Lake, SK, recently won his first professional mixed martial arts (MMA) fight after relocating to Meadow Lake this fall to continue his training. Under the tutelage of Clearwater River Dene Nation fighter and local trainer Stuart Fontaine, Sutherland – known as “The Stun Gunn” when in the ring and in the cage – defeated his opponent, Joey Gobeil, in the third round when the referee made the decision to stop the bout. The fight took place Dec. 1 in Warman and was promoted by the Saskatoon-based Modern Fighting Championship.

“It felt pretty good,” Sutherland said about his win. “My fight against Joey Gobeil was a tough fight because he’s a high-ranking purple belt fighter (in Brazilian jiu jitsu), so it was nice to be able to overcome him.”

Sutherland went on to say constant discipline in terms of balancing his day job with his training sessions helped him achieve victory.

“Even if I was tired, I would put in the training during the evenings because this meant so much to me,” he said.

Now 23 years old, Sutherland began his MMA training when he was 12. He started fighting in the amateur ranks at age 16 and had an amateur record of 6-0 heading into his pro debut.

“Chad and I have been training together since 2012,” Fontaine, who has also fought professionally, explained. “I coached him for his last two amateur championship fights and, since then, we looked to get him more amateur title fights throughout Canada, but they would always fall through. So, he had no choice but to leave the amateur scene to become a professional competitor.”

Leading up to the Dec. 1 encounter, Sutherland trained three times a day and went from 263 pounds upon his arrival in Meadow Lake to 219 by fight night.

“My game plan for Chad was to work a lot of jiu jitsu defence, a lot of wrestling, to have him keep calm in bad positions and to keep the fight standing,” Fontaine continued. “Sure enough, Chad landed some vicious leg kicks and chopped Joey down. Then, to cap it off, Chad tossed in a head kick for the TKO.”

Sutherland, meanwhile, said he plans to stay in Meadow Lake and to continue his training.

“It’s been great here,” he said. “People I train with have been very supportive of me all along and now, anywhere I go, people will randomly approach me and congratulate me on my win. It’s a really great feeling… As for my next fight, nothing is confirmed yet, but we might have something lined up soon. For now, it’s just going to be more training and getting ready for whenever that next fight may be.”

Fontaine agreed, stating he is excited for whatever happens next.

“I have cornered numerous fighters in my time, but this time it was different because Chad is my student and, more importantly, my brother,” Fontaine noted. “We have a bond when it comes to the fight game, so when he got the win I was filled with so much pride and joy. It was a great way for him to display his hard work and dedication. This is only the beginning.”