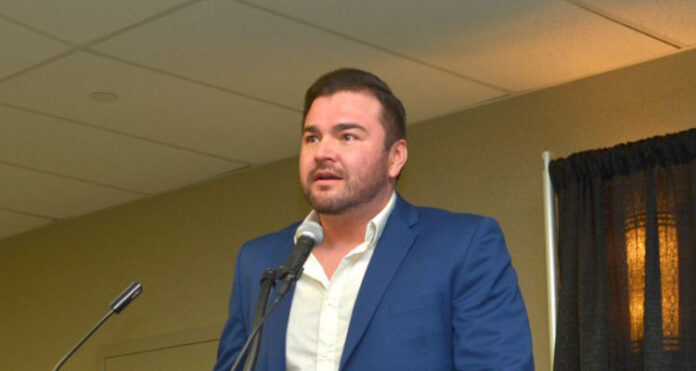 Richard Ben is ready to reunite the nine bands that make up the Meadow Lake Tribal Council (MLTC).

This was the message Ben continued to share with supporters after being elected as the new MLTC tribal chief following a vote held in Saskatoon Nov. 21. Ben, who for several years served as chief of Makwa Sahgaiehcan First Nation, earned 34 votes to the 15 garnered by fellow candidate Robert Sylvester of Birch Narrows Dene Nation.

“I’m very emotional right now,” Ben said during his victory speech. “A big thanks to all of you who came here… I won’t let you down. I explained to you what it is I want to do. I want to bring us all together, all our communities, to be that powerhouse we used to be when people would talk about us, not just in Saskatchewan but throughout Canada.”

Ben, a father of two, firmly believes in culture, tradition and community and, during his time as MSFN chief, has worked hard to build a strong community where families can grow and prosper, as well as a community where members can feel safe and have opportunities to better themselves and their families. He also believes, by working together, the nine MLTC bands can achieve much of the same.

“We all have to come together to move forward, and we will,” he said. “I promise you that. With all our chiefs who are here, all our councilmen, all our community members we will go far.”

Ben served six terms on MSFN council, first as a councillor – a role he was originally elected to at the tender age of 23 – before running for chief at the age of 25. He’s now 36 years old.

“Wow, I never thought I would be here,” he added in an interview conducted following his visit to the podium. “I decided to run for tribal chief earlier this year. I was talking to some of the chiefs, and they approached me and asked if I would consider it.”

Ben admitted he was hesitant at first because he was concerned what his departure from MSFN council would mean for his community.

“But, I have full faith in the council I have there,” he said. “They care about our people and they work great together, so that’s what made me decide to move forward and help all our nations.”

“We’ve always had a good relationship, always seen the same vision,” Ben said. “He asked me to consider running and I told him, if his chief (Morrison) and council would support me, I would consider it. I gave Eileen an offering of a blanket and tobacco, asked if she would support me and she said yes.”

Unlike a regular band election, Ben said campaigning for tribal chief was much more difficult because of the number of communities involved and the simple fact he can’t be everywhere at one time to encourage people to get out and vote.

“It was still a great experience, however,” he said. “I’m still in awe right now.”

He also looks forward to settling into his new role as soon as possible.

“I still need to take care of things back home and then I’ll start making the transition to the tribal council – hopefully I will be there by next week,” Ben noted. “I feel good about the leadership back home and am sure they will represent our people to the best of their ability. There are 13,000 members in our nine communities, so I have some big shoes to fill. My main focus now is to bring all our communities together, bring that unity back. It’s been a time where our communities feel displacement from their tribal council, and I want to bring them back… It’s been like this for a long time. I’ve been at the table for 10 years and even our members feel disengagement. I want them to feel the MLTC is theirs and I want them to feel comfortable going there and having the MLTC serve them. That’s what they are there for. If there were no nine nations, there would be no tribal council. We ned to pull up our socks and fulfil the needs of our nine nations. But, I will also take direction from our chiefs and councillors. Whatever they want me to do, I am at their service.”

The position of tribal chief is a four-year term, which Ben believes is sufficient time to achieve the goals he has set.

“One of those goals is to get a dialysis machine for Meadow Lake,“ he added. “I feel for the people in the northern communities who need to travel seven hours one way and back to get treatment. Before my brother passed away, he had to travel to Saskatoon three times per week for dialysis treatment. He spent the last part of his life travelling back-and-forth, and that’s no way to live.”

The new chief also plans to work alongside the City of Meadow Lake to help the community as a whole reach new heights.

“I want to make Meadow Lake grow,” he said. “Right now things seem to be at a standstill. Our people are getting bigger and stronger, and we need to start evolving. We bring a lot of quality to the table, and other areas I would like to see a stronger focus placed on are kids and sports.”

This harkens back to Ben’s pre-political life when he worked as a recreation coordinator for his community with aspirations of one day joining the RCMP.

“I never planned to run for council, but I was asked to and so I did,” he said. “I never thought I would get in, yet here I was the highest voted councillor and the youngest.”

Although his parents, Jenny Ben and Peter Merz, had no political background, Ben’s aunt, Helen, served as MSFN chief as well as tribal chief in the past.

“She’s been very influential on my life,” he said.

Ben is engaged to Adrienne Durocher, has two daughters and two stepsons, and credits his parents as being the biggest influences on his life.