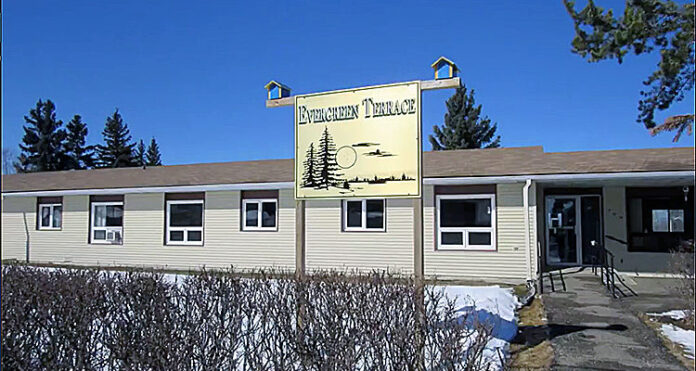 The Village of Loon Lake believes in giving back to the senior members of the community.

“The province has been getting rid of a number of its low-income housing buildings and the Village of Loon Lake had the option of buying Evergreen Terrace for $1,” explained village administrator Erin Simpson. “We held a town meeting to discuss this opportunity and the people in attendance were definitely in favour of us having a go at it.”

The village officially takes the building over Feb. 1.

“Although the village will own and upkeep the property, Evergreen Terrace will be run by a board of directors,” Simpson continued. “They will take over and soon get the ball rolling.”

The new board will be chaired by Carolyn Mason.

“We’ve put together a group of people who are actively interested in seeing Evergreen Terrace become viable,” Mason noted. “As the province put it, in the past, the 21 units have been chronically vacant.”

Simpson echoed this by saying, when Sask Housing owned the building there were numerous stipulations in place that made it difficult to find people to rent the units. Some of these rules will now be relaxed.

“We’re still going to keep it as an adults only building, but it won’t be restricted to only seniors,” Simpson said.

“There is a need for a building like this,” she said. “Some day I won’t be able to take care of my big house and three-and-a-half lots all by myself, but I would still like to stay in Loon Lake. There are a few people who live at Evergreen Terrace now and nobody wants to see them leave.”

An open house is scheduled for Feb. 6 from 10 a.m. to 12 noon to allow potential occupants to tour the facility and get a better idea of what the village and the board have in mind.

“We felt it was important to take ownership of this building when the opportunity arose because we owe it to our seniors – the people who currently live there,” Simpson stated. “If we didn’t take it, it would likely have fallen into private hands and then who knows what would have happened?”

Mason said she believes in keeping a community together as much as possible.

“I’m excited to be a part of this,” she said. “It’s another way of giving back to the community.”