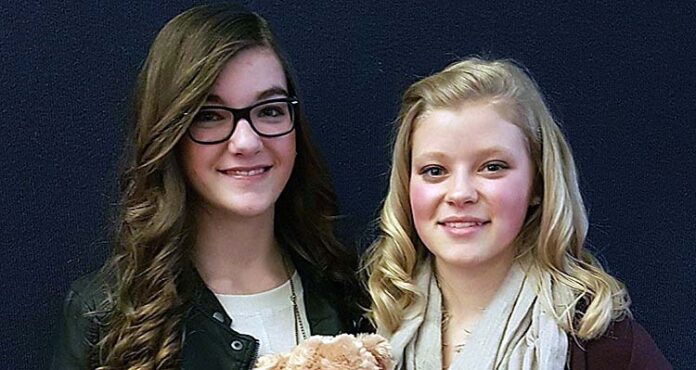 For the second year in a row, Loon Lake duo Katelynn Schellenberg and Lisa Taylor will have an opportunity to share their musical talents with the entire province when they perform on the big stage at the annual Telemiracle broadcast March 3 and 4. It’s a dream come true for the teens who have been singing and playing piano together since a very young age.

“Lisa and I performed at Telemiracle in Regina last year and it was a really great experience,” Schellenberg said. “We enjoyed it so much, we decided we wanted to go back again this year. So, we auditioned again and, as luck would have it, we found out Dec. 18 they were interested in having us back.”

This year, Telemiracle 43 will take place in Saskatoon.

“We both own a piano, so we’re always over at each other’s houses practising together,” Schellenberg continued. “We also recently competed at a youth talent show where we won a $200 scholarship for our performance of You Say, the same song we plan to perform at this year’s Telemiracle.”

Schellenberg went on to say she’s excited to share her talent with so many people.

“Hopefully our music inspires people and we can use our gifts to brighten someone’s day,” she said.

“Telemiracle is such a great cause,” she said. “It’s helped people in my family before, so I know what kind of impact it can have on people and how it’s helped people I care about. We also enjoy performing, so it will be great to be on stage. We also fundraise for Telemiracle – last year, we presented them with $2,000.”

Taylor also said she and Schellenberg feel like ambassadors from the North when they attend the Telemiracle broadcast.

“People from here know us and there isn’t really a lot of talent from this part of Saskatchewan that appear on the show, so it’s exciting for local viewers to see people they know on TV,” she noted. “Yes, it is nerve-racking, but we practice a lot and we’re really excited.”

Schellenberg’s father, Tim, who serves as pastor at Cornerstone Community Church near Loon Lake, said his daughter, along with Taylor, have a history of singing and often perform at church as well as at various school functions. Katelynn’s mother, Heidi, is also a singer and has performed at Telemiracle in the past.

“These girls want to give back to other people… Telemiracle is an opportunity for them to do this,” Tim Schellenberg said. “As a father, it makes me proud but it also goes deeper than that. Words can’t really describe the feeling I get when I see their willingness to pursue the thing they enjoy most and to do it for the sake of others. It’s a really cool thing.”

Other local performers who will perform at Telemiracle in Saskatoon this year include Goodsoil’s Atlanta Jane and Meadow Lake’s Payton Getz. They have also performed at the provincial show in past years.

Meanwhile, the Meadow Lake Kinsmen and Kinettes will once again host a local version of Telemiracle that will run concurrently with the Saskatoon event.

“We’ll be at the Civic Centre once again,” stated Kinsmen member Geoff Barton. “It will be a chance for the community to come together, enjoy some local talent, bid on some amazing items and help out a good cause. It’s going to be a lot of fun.”