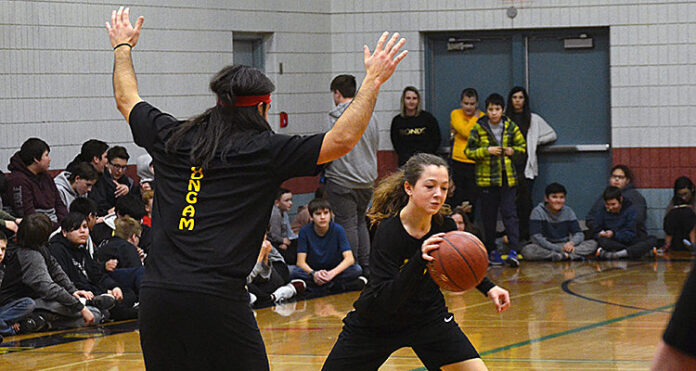 Not only because the winter storm this past weekend resulted in an unprecedented number of teams dropping out of the competition, but also because upcoming changes to the Meadow Lake school system this fall means the basketball tournament hosted by Jonas Samson Junior High was the very last Jonas Jam.

“At the very least it was our final Jonas Jam as Jonas Samson Junior High School,” remarked JSJH girls basketball coach Jennie Andres. “Next year the name of our school will change, so we may even look at changing the name of our basketball tournament as well. We might even scale things back and do something a little smaller.”

Last October, the Northwest School Division’s board of directors voted in favour of changing school structures starting with the 2019-20 academic year. This fall, Jubilee and Lakeview Elementary Schools will remain Kindergarten to Grade 4 facilities, while Gateway Elementary will become a Grades 5-7 school for students coming from the Jubilee system and JSJH will transition into a Grades 5-7 school for children coming from the Lakeview system. Grade 8 students will also remain at Jonas next year, while Carpenter High School will become a Grades 9-12 facility. In 2020-21, Grade 8 will also be added to Gateway.

“Things are going to be different next year for sure,” stated JSJH boys basketball coach Rob Kozinski. “That’s why we wanted to make this year’s tournament work no matter what.”

And, work it did in spite of Mother Nature’s efforts to derail the school’s plans.

“On the girls side, of the eight teams originally scheduled to compete there were only three that ended up making it and that included us,” Andres said.

To add a little more competition to the event, JSJH split its team into two, while the visiting squads included Bishop Lloyd Middle School and College Park School from Lloydminster. In the end, JSJH finished first overall, while the other Jonas team won the consolation side.

“We would have liked for our girls to have more of a chance to play, but it came down to safety,” Andres added. “We’re not going to put kids at risk for sports.”

In boys action, the competition was a little more solid. JSJH once again split into two teams to fend off teams from North Battleford Comprehensive, John Paul II Collegiate, Bishop Lloyd and College Park. In the end, the home teams finished fourth and sixth respectively.

“The competition was tough, but everyone played just as good if not better than they had all year,” Kozinski noted.

“I’ve coached a truly inspirational group of athletes this season – they are a wonderful group of girls,” she said.