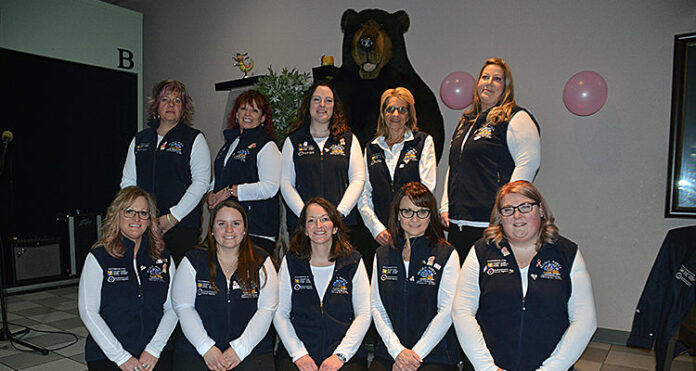 The 2019 Prairie Women on Snowmobiles (PWOS) ride in support of cancer research kicked off Saturday evening (Feb. 2) with a banquet held at the Bear’s Den in Meadow Lake. The following morning, the group of core riders departed on the first leg of their journey knowing they have the support of so many behind them.

“Unfortunately, we don’t have a core rider from this area this year,” remarked Meadow Lake resident Gerri Moeller who has participated in the ride three times since 2010. “Normally there is, but because we didn’t have one and were still hosting the kick-off event for 2019, we decided to scale things back a little and hold our banquet at the Bear’s Den opposed to the Civic Centre where we have held such events in the past.”

In spite of this, both Moeller and PWOS president Kelly Rea were pleased with the turnout.

“The dinner is the first opportunity for all the riders to be together in one place,” Moeller said. “It’s a great way to launch their fundraising efforts over the course of the following six days.”

“Every year it is exciting and thrilling as we set out on the snow,” she said. “The ladies this year are eager to get our message out, to meet a whole bunch of new people. We have some new towns on our route this year, and this kick-off in Meadow Lake is fantastic. The people really came out and supported us.”

This year, Moeller, along with her husband and son, led the PWOS riders from Meadow Lake early Sunday to St. Walburg.

Prairie Women On Snowmobiles is a non-profit organization with an annual mission of provincial awareness events designed to focus attention on breast cancer and the recreation of snowmobiling as well as raise the much-needed funds for breast cancer research. Over the past 18 years, the group has raised almost $2.5 million for the cause.

This year’s ride began in Meadow Lake and will take the riders throughout the province before wrapping up in Prince Albert.

“We never set a fundraising goal because every dollar we raise is one more than we had before,” Rea said.