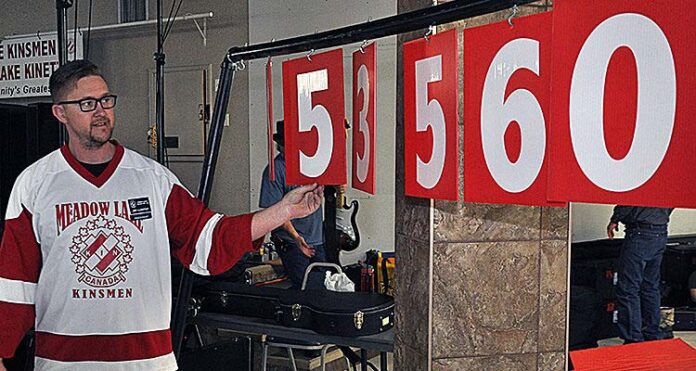 The people of Meadow Lake and area will once once again open their hearts – and their wallets – in support of an important cause this weekend.

While Telemiracle 43 kicks off Saturday night (March 2) in Saskatoon, the 42nd edition of the local Telemiracle event will get underway at the same time at the Meadow Lake Civic Centre. Featuring a live radio broadcast, an array of local talent and opportunities to donate, the event is expected to once again be a major hit.

“It’s a fundraiser much like the telethon that alternates between Regina and Saskatoon each year,” explained Meadow Lake Kinsmen member and Telemiracle chair Duane Horvey. “We put it on each year as a way of helping people who need help and who, unfortunately, can’t always afford it.”

Much like past years, Horvey said this year’s Telemiracle – which starts at 8 p.m. Saturday – will be highlighted by the live entertainment, radio broadcast and the always popular bid board which allows them to purchase items donated by local businesses and individuals. All funds raised at the event will go to Telemiracle.

“Something new and exciting this year is we’re going to have a photo booth set up,” Horvey continued. “It will be sort of like the photo booths you see at weddings and whatnot, so people will be able to have their Telemiracle photo taken, which should be pretty cool.”

Telemiracle in Meadow Lake will wrap up at 5 p.m. Sunday (March 3). At that time last year, $44,000 had been raised. When added to money collected through a number of activities prior to the event itself, the grand total was $58,846.

“This year, we’ve set a goal of $60,000 and I am confident the Meadow Lake community can make that happen,” Horvey said. “It’s always a great event because it involves local people – people everybody in Meadow Lake knows. It’s about the whole community coming together.”

Horvey also said, if anyone is interested in performing at Telemiracle but has not been scheduled for the show, to simply come out during the event and organizers will find time to fit them in.

“We’re going to be there all night – it’s going to be a lot of fun,” he said. “The Kinsmen are very passionate about Telemiracle and this is a fundraiser I don’t expect will ever go away in Meadow Lake.”