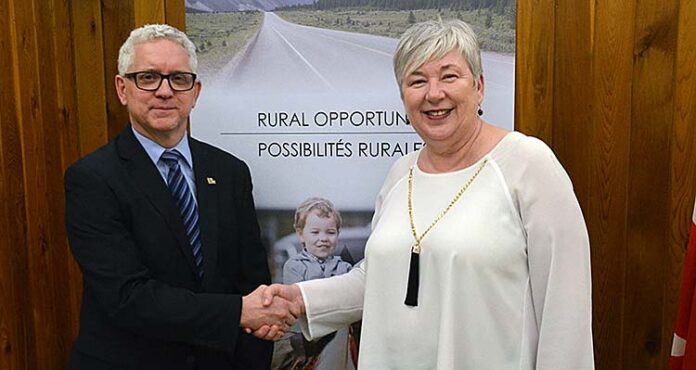 The feces-like odour that notoriously permeates the air in Meadow Lake during springtime could soon be a thing of the past.

According to mayor Gary Vidal, the smell – traditionally experienced when warmer weather returns and sewage buildup is released from the lagoon system currently situated in the southwest corner of the city – will be addressed as part of an upcoming project that will see the existing sewage lagoon relocated outside city limits. The move – which is part of an infrastructure funding announcement made at city hall Monday (March 11) by federal minister of rural economic development Bernadette Jordan – will also help protect Backwater Creek, which sits behind the existing lagoon and links to Meadow Lake, from the risk of raw sewage overflow in times of heavy flooding. In addition to this, moving the lagoons is expected to help keep Meadow Lake clean, an important endeavour considering the lake is the raw water source for the city’s water treatment plant.

“Taking concrete steps to adapt to the impacts of climate change is more and more essential to ensuring a safe, prosperous future for our kids and grandkids,” Jordan noted. “This work will help keep people’s drinking water clean, make sure they gave uninterrupted access to essential services and greatly reduce the costs of flood recovery.”

The Government of Canada is contributing $8 million to the city through its Disaster Mitigation and Adaptation fund. Along with the relocation of the lagoon, the city will also put the funds toward replacing all of its common trench sewer and water pipes. For residents living on the east side of Meadow Lake, flooding has become an increasingly serious issue due to local geography and climate change. This, Jordan said, puts extreme pressure on the city’s more than 50-year-old sewer pipes, which run alongside the drinking water mains.

“We’re very pleased to be the first project approved in Saskatchewan under the Disaster Mitigation and Adaptation fund,” Vidal remarked. “The opportunity this funding provides to our community to further invest in our infrastructure is significant. We want to thank the Government of Canada for its commitment to this project. This project’s approval allows us to make investments in the resilience of our community as we upgrade some of our oldest infrastructure and reduce some of the potential damage from serious flood events.”

Vidal went on to confirm the first part of the project includes a new lift station and the installation of full water and sewer services on the east side of town.

“Once all the underground infrastructure is upgraded, construction of pavement, curb and gutter and such can be considered in the future,” he added. “This will be very beneficial for these residents.”

“This will improve the environment for our whole community as well as provide protection to our water system in the event of a serious flood,” Vidal said.