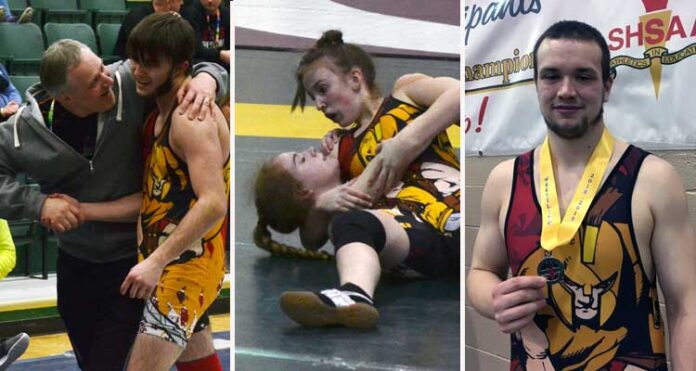 It’s been a heck of a ride.

That’s how both wrestlers and coaches at Carpenter High School described the 2018-19 wrestling season, which recently wrapped up following this past weekend’s Saskatchewan High Schools Athletic Association (SHSAA) provincial championships, and which marked the end of an era for several CHS athletes.

“I am really proud of the progress the wrestling team has made this year, noted CHS wrestling coach Jason Guenther. “I knew it was going to be tough to defend our provincial title from last year.”

Five wrestlers competed at provincials, which took place March 8 and 9 at Campbell Collegiate in Regina. And, although CHS did not bring home a provincial championship this year, Guenther said the showing each competitor gave spoke volumes for how much the sport has grown in Meadow Lake over the past several years.

“Although we had some veterans, for various reasons we did not have as many able to compete at provincials this year,” he said. “However, we did have five qualify and three who made it to the crossover rounds.”

Orion Craig (male 53 kg) and Melinda Bobier (female 56 kg), who are both in Grade 10, were knocked out early in the competition. Meanwhile, Skylar Barden (female 60 kg) and Logan Boser (male 77 kg) both placed fourth in the province.

“These are personal bests for both of them,” Guenther added. “Logan will graduate this year, but I do hope he stays involved in the sport as he has such a passion for it. We still have another year for Skylar to try to push her onto the podium.”

“I know he was disappointed as he had won a provincial title in the 130 kg weight class for the past two years,” Guenther said. “This year he has improved his fitness immensely, and because of his better condition he dropped to a more competitive weight class. He fought hard in all his matches, and we knew he was going to have a strong competitor in the final. It was very close with a score of 5-5 into the final seconds. But, his opponent shot off of the whistle and caught Jacob for the win (on points) with only eight seconds left. A silver is still something to be proud of, and the experience is a learning opportunity for us all.”

“After winning the 130 kg provincial championship in both 2017 and 2018, Jacob knew to continue to grow as an athlete he needed to challenge himself,” Brownrigg said. “In the off season, he dedicated himself and transformed his physique, losing more than 50 pounds. Throughout the year, he and his rival from Yorkton traded wins and losses with every match too close to call. The gold medal match was no different… In the final seconds of the match, Yorkton attacked to score the points needed to break the tie. The cheering fans gave these young warriors a huge round of applause as they embraced with respect for each other’s heart and courage.”

Brownrigg also said Ambroziak, Barden and others will compete at next month’s national championships in Fredericton, N.B.

“Jacob has already received a scholarship offer and has many more years of wrestling in front of him,” he added.

Ambroziak said he’s pleased with his success at provincials and where his wrestling career has taken him.

“It’s been a lot of fun and I look forward to whatever happens next,” he said. “A big thank you goes out to my coaches, my family, fellow wrestlers, friends and fans. I couldn’t have done this without their continued support.”

Guenther, meanwhile, said next year will be a rebuilding year for the Spartans.

“We need to revitalize our energies and rebuild the team to the powerhouse Meadow Lake can be,” he said.