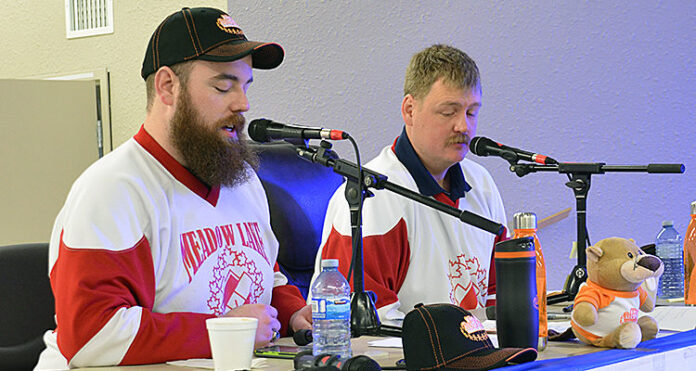 That was how Kinsmen member Duane Horvey summed up this year’s Telemiracle held Saturday and Sunday (March 2 and 3) at the Meadow Lake Civic Centre. Horvey chaired the event this year and said he is very pleased with how things turned out.

“I believe we still have a few things to finalize, but it looks like we were able to raise around $35,200,” Horvey said.

Although this amount is smaller than the $60,000 the Kinsmen and Kinettes were hoping for, Horvey said $35,200 is still a tremendous amount of money that will go a long way toward assisting a good cause.

“It also once again makes Meadow Lake one of Telemiracle’s top fundraising communities throughout Saskatchewan,” he added. “As a community, we can be very proud of what we’ve accomplished.”

This year’s Telemiracle event in Meadow Lake kicked off at 8 p.m. Saturday and continued until 5 p.m. Sunday. It ran concurrently with the province-wide telethon out of Saskatoon and featured a live radio broadcast, live entertainment, bid board items, food, a photo booth and more.

“It’s tough to guess how many people came through the doors on the weekend, but we had at least 200 chairs set up at the Civic Centre and, at different points throughout Sunday, those chairs were all filled,” Horvey said. “This just goes to show Telemiracle still holds a piece of everyone’s heart and we can’t thank the community enough for its support. Whether they came down to the event itself, listened on the radio, made a pledge or purchased an item from the bid board, every little bit certainly helped.”

Horvey went on to say, without the support of the community, the Kinsmen wouldn’t be able to do what they do.

“That’s why they deserve our gratitude, as do all the volunteers and performers,” he noted. “A special thanks also goes out to the photo booth operators – I saw a lot of great Telemiracle photos pop up on Facebook. Sound Dogs also did a great job making everyone sound so great on that stage, while the bands Lady and the Gentlemen Jammers and The Incredibles – a group that includes David Mohr, Dennis Lehoux and Wilf Morgenstern – have given us their support year after year. Wilf is 95 years old and he still gets up there and plays that keyboard.”

Horvey concluded by reiterating how pleased he is with the local event’s ability to raise as much money as it did.

“This year, the big show in Saskatoon raised more than $5-million and we’re a big part of that,” he said.