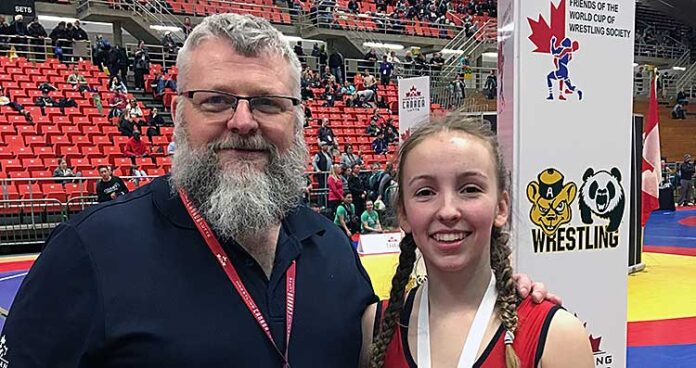 The differences between the two sports couldn’t be any greater, but this past weekend both wrestlers and curlers from Carpenter High School in Meadow Lake had one common goal – to qualify for 2019 Saskatchewan High Schools Athletic Association (SHSAA) provincial competition.

The top two teams in each category advance to this weekend’s provincial event, with the CHS boys team – consisting of skip Brody McAmmond, third Mason Rediron, second Damian Lavallee, lead Anthony Zacharias and alternate Andrew Campbell – coming out on top in the ‘A’ qualifier. The other top boys team was North Battleford Comprehensive High School.

“The boys team won the ‘A’ qualifier against Holy Cross from Saskatoon,” explained CHS curling coach Kendra Paramchuk. “The boys won 9-8 in an extra end and will advance to provincials in Humboldt this weekend. All players had a successful weekend and we wish them best of luck this weekend. Their first game will be at 11 a.m. Friday followed by opening ceremonies.”

“The girls team had an excellent weekend and kept improving game by game,” Paramchuk said. “They lost to Rosthern Junior College in the ‘B’ semi-final. The entire team will return next year. We saw growth in the team and would like to congratulate the girls on a great season.”

CHS did not have a mixed team at the regional competition, but the two mixed squads that did advance to provincials include St. Joseph High School and Spiritwood.

On the wrestling mat, five of the 10 athletes to compete at SHSAA regionals Saturday (March 2) in Weyburn, SK have advanced to the provincial tournament scheduled for this weekend in Regina.

Among those to compete at regionals, but who did not qualify for the provincial round were Parker Vandale-Niccolls (male 65-kg), Brad Gristwood (male 73-kg), Brandon Lacendre (male 73-kg), James Villebrun (male 90-kg) and Ashton Millar (male 115-kg).

“All the athletes fought hard every match,” noted CHS wrestling coach Jason Guenther. “There were a few disappointments, but that happens in sports. We have five qualified to go to provincials, so this week we will do our best as coaches to prepare them. Provincials is a higher level and will be more intense than regionals. We have a few less qualifications this year than last year, as we did have fewer wrestlers this year and more of them are rookies.”